The Zionist charlatans have made all kinds of mistakes along the way of attempting to impersonate real Jews but their success depends on the ignorance and gullibility of others. Certainly the real Jews were never fooled: “AND THESE SAME ZIONIST “STATESMEN” HEEDLESSLY PUSH THE WORLD TO THE BRINK OF ANOTHER TOTAL WAR – REVOLVING ENTIRELY AROUND THE HOLY LAND.”

Converted Jews of today are not the Hebrews of the bible.

They have been using the “Jew” appellation since the late 18th Century in order to appear to be Judahite Hebrews – see How The Ashkenazi Jews Conquered the West.

That way people could see them as the Chosen People, while they endeavored to steal Palestine and create modern-day Israel without the objection of the Christian world, especially since they were Eastern-European Nomads seeking a new country following the loss of their homeland Khazaria.

As Jewish land thieves disembarked in Palestine in the 1940s to seize Palestinian lands and homes that Zionist terrorist groups – such as the Irgun, the Stern gang, and Haganah – had stolen in order to turn the country into Israel, they adopted Hebrew names to complete their “Hebraization” process – not unlike what they did when they scattered throughout Europe and America and assumed European surnames.

Then they – who originally spoke Yiddish – resurrected the dead Hebrew tongue after thousands of years in the dustbin of oblivion to make it Israel’s official language. In so doing, they consolidated in the world’s mind the impression that they were Hebrews rightfully returning home, when in fact they were not.

However, in their lust to deceive the world they got blindsided and completely overlooked the fact that, following the destruction of the Kingdom of Israel in 721 B.C., not even the Hebrews spoke Hebrew. They spoke Aramaic, the language of Jesus.

Consequently, Israeli Jews are nothing but impostors living on stolen Palestinian land.

Their very presence in historic Palestine is the working of dark spiritual forces, which are trying to destroy the New Covenant of Christ by “resurrecting” the obsolete Old Covenant, using converted pharisaic Jews who are NOT even remotely descendants of the patriarch Abraham. 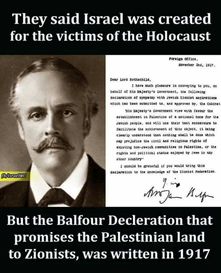 In so doing, they hope to totally muddy up the Christian faith, and obscure the truth of the superseded Old Covenant and of Christ’s fulfilled prophecies concerning the total annihilation of the Hebrew people and the destruction of Jerusalem, which took place in 70 A.D.

“For the land is full of adulterers; it mourns because of the curse. Their pastures have dried up into a wilderness. Their course also is evil, and their might is not right.” Jeremiah 23: 10

There has not been peace in the Middle East the moment non-Hebraic, pharisaic Jews set their sight on Palestine and created Israel in 1948.

The founding of that Apartheid country was forged on lies, especially on the misrepresentation that today’s Jews are Hebrews rightfully taking possession of inherited land, when in fact they’re NOT Hebrews at all – all Hebrews are irrevocably dead, their land inheritance buried along with them.

LAGenie Retweeted · Cynthia McKinney PhD @cynthiamckinney
17 hours ago
Message sent in love to my brothers and sisters in Africa: PLEASE DO NOT TAKE ANY COVID-19 VACCINE. WHY ARE THEY STARTING WITH YOU? DON'T BE GUINEA PIGS FOR ENGINEERED DISEASES FROM THE WEST. https://t.co/wLdpLTfpF4
View on Twitter
266
0
LAGenie Retweeted · Muhammad Smiry 🇵🇸 @MuhammadSmiry
17 hours ago
The occupied PALESTINE https://t.co/TTjilDORNh
View on Twitter

204
0
LAGenie Retweeted · marshall @Marshall_H15
22 hours ago
🛑How would you feel if that was your country?? https://t.co/nPei7QNQol
View on Twitter