This May 31 marks 10 years since Israeli commandos attacked the Gaza Humanitarian Flotilla in international waters and killed 10 people. Norman Finkelstein, one of the world’s most effective critics of Israel, is observing the occasion with a persuasive indictment of Fatou Bensouda, the chief prosecutor of the International Criminal Court (ICC) in The Hague, for refusing to take legal action over Israel’s lethal attack on the Mavi Marmara, the Flotilla’s flagship.

At first glance, Finkelstein’s new book resembles a legal brief. But start reading more closely, and you soon see his trademark indignation, intense and eloquent. The Comoro Islands, where the Mavi Marmara was registered, brought the Gaza Flotilla case to the ICC in 2013, and Finkelstein points out that the chief prosecutor since then has tried to bury it 3 times. He is not diplomatic; he charges that she “defiled her office by refusing to investigate credible allegations of Israeli criminality.”

Finkelstein, with his characteristic Talmudic scholarship, scrutinizes various human rights reports on Israel’s killings on the ship, examining them alongside the Israel government’s own alleged self-inquiry. He points out, chapter and verse, just how Fatou Bensouda accepted Israel’s version of events (which Amnesty International described as a “whitewash”) while dismissing contradictory reports from the U.N. Human Rights Council and the U.N. Secretary-General’s Panel of Inquiry.

He argues that as a consequence Bensouda “grossly misrepresent[ed] the facts of the assault” itself. But even worse — she took Israel’s armed commando attack as an isolated event, instead of connecting it to even larger Israeli crimes: “the illegal Israeli blockade and the humanitarian catastrophe in Gaza.”

Let’s start with the actual Israeli assault. Bensouda echoed Israel’s alibi; it planned to stop the Flotilla peacefully, its commandos met with resistance when they boarded the Mavi Marmara, after which perhaps some excesses happened but the actions of a few Israeli soldiers didn’t rise to the level of a case that the International Criminal Court should take up. Finkelstein crushes this version. If Israel truly expected to act nonviolently, 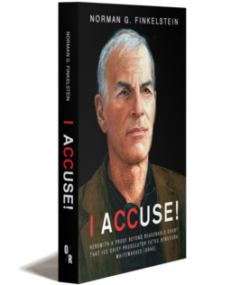 then why did they deploy an elite commando unit trained to kill, not the Israeli coast guard or a police-like unit accustomed to handling civil resisters?

His indignation rises further when he considers Israel’s allegations that some of the passengers on the ship planned “extremely violent” resistance. He asks why these allegedly violent resisters “didn’t manage to kill any of the commandos,” but Israeli soldiers who were supposedly “rehearsed in the moral imperative to execute the operation ‘without any injuries’ ended up killing 10 passengers by shooting each of them multiple times, five in the head and even at point-blank range.”

(Another reason the outside world was confused about what happened on the Mavi Marmara was awful mainstream press coverage. At the time, this site noted that the New York Times religiously transmitted the Israeli version, but did not interview one single eyewitness from on board the ship.)

But Bensouda’s ignoring the Israeli siege of Gaza is the even greater injustice. Finkelstein concludes:

She refused to pronounce the blockade illegal, she effectively ignored the humanitarian catastrophe induced by the blockade. . . Had she properly rooted the assault [on the Mavi Marmara] in its critical context, the Prosecutor would have been hard-pressed to curtly dismiss the charge of Crimes against humanity.

Norman Finkelstein has a sharply different interpretation of the Israeli attack. He makes “the reasonable inference that Israel sought a bloody confrontation, although probably not on the scale that ensued.” He adds, “The prime impetus. . . was almost certainly to stem the rising tide of humanitarian vessels destined for Gaza.” He concludes that the fundamental truth is that the attack was a key part of “an Israeli plan or policy targeting humanitarian missions destined for Gaza so as to perpetuate crimes against humanity in Gaza.”

What’s worse, in the past 10 years Israel’s plan has largely worked. Resistance inside Gaza does continue, but the besieged territory is poorer and more isolated than ever. Finkelstein includes a long Appendix detailing Israeli crimes during its 2014 invasion of Gaza, and he traces the ongoing impunity right back to the failure of justice for the 10 dead on the Mavi Marmara. (He has even more detail in his vital longer work from 2018: Gaza: An Inquest Into Its Martyrdom.)

I Accuse! ends on a slightly upbeat note. In a last-minute postscript, Finkelstein notes that on December 20, 2019 Prosecutor Bensouda announced that, in response to a referral from the “State of Palestine,” the Court will open an investigation — although not into the Gaza Flotilla. He closes:

It is imperative to stay vigilant. The evidence amassed in these pages makes clear that the Prosecutor will not be persuaded by facts and reason but, instead, by the political forces at play behind closed doors and in the court of public opinion. Whereas Israel will bring to bear every squalid and sordid instrument in its arsenal, the forces arrayed against it will be able to draw on the mighty weapons of Truth and Justice. All eyes are now riveted on the Chief Prosecutor as the unfolding drama decides which side will prevail in this epic struggle.