“We knew they were different from ‘our Jews,’ I am talking about the Arab Jews. We saw them as foreigners who came from Europe more than as Jews.” 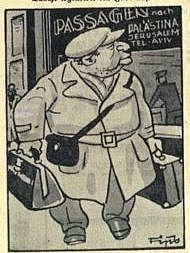 When you grow up Jewish in the US, you’re called on by Zionism in one way or another.

Until recently, the Jerusalem bureau chief was Ethan Bronner, who had a son in the Israeli army.

He has since been replaced by Jodi Rudoren, who was an education reporter in New York.

The militarization of the education system: at age 17, as Israeli high schoolers are preparing to go off to the army service, they are sent to Auschwitz, on the March of the Living, with their high school classes to be indoctrinated and to be cultivated to view the Holocaust in the light of their army experience.

Polls on adolescent attitudes in Israel on the occupation and the army show that they’re very conflicted about the whole thing before they go on these trips.

But after going through this whole process, which ends with a candlelight ceremony in a gas chamber where they’re asked to take on the personas of Jewish children who were slaughtered in the gas chambers of Auschwitz, they come out with much more strongly nationalistic opinions and much stronger support for the army as an institution.

They can hardly wait to put on the IDF uniform and start “defending” a pretend enemy.

If you listen to the rhetoric of Benjamin Netanyahu, the Holocaust is always present when he’s talking about threats to the state of Israel.

He recently gave an address at Bar-Ilan University, where he spent much of his speech accusing the Palestinians of having a direct role in the Final Solution, which is false.

They weren’t responsible for any Jewish deaths in Europe. You can imagine how Israeli teens who are entering the army are going to play this out.

It’s pure incitement, but it falls on really fertile soil. Many Israeli dissidents I interviewed told me that they, as youth growing up in Israel, lived out the Holocaust every day.

They told me that one of the hardest things to overcome in their process of deprogramming from years of constant indoctrination they received in Israeli schools and all of the key institutions in Israeli life was to accept that the whole world wasn’t against them as Jews, that a second Holocaust was not imminent and that the Nazis did not have heirs in the Palestinian national movement.

When you grow up Jewish in the US, you’re called on by Zionism in one way or another. Until recently, the Jerusalem bureau chief was Ethan Bronner, who had a son in the Israeli army. He has since been replaced by Jodi Rudoren, who was an education reporter in New York.

When you walk down the streets of Haifa, a lot of Jews carry guns and wear uniforms and this symbolizes to Palestinians their destruction and dispossession. Welcome to Israel.
.