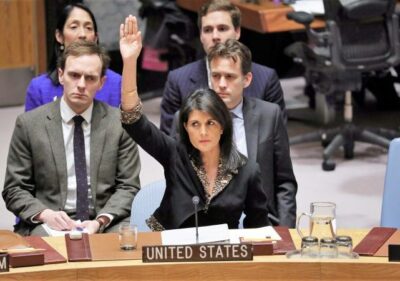 “The days of Israel-bashing are over…For anyone who says you can’t get anything done at the UN, they need to know there is a new sheriff in town.” -ZioHindu Nikki Haley

Shocking revelations from 8,000 pages of transcripts of Gabbard’s spiritual guru reveals racism in the sect at the centre of her life and her 2020 presidential campaign.

Questions about Tulsi Gabbard and her family’s ties to Chris Butler, a self-styled guru and founder of an offshoot organisation of the Hare Krishna movement called The Science of Identity, have dogged the 2020 Democratic Party presidential candidate since the moment she ran for a seat in Hawaii’s state house aged 21 in 2002.

Whereas the now 38-year-old has dodged and deflected the influence and role Butler and his sect have played in shaping her views in the past, she has become more forthright about her association and involvement with him in recent times, telling The New Yorker in 2017 that Butler had shaped her Hindu identity. She expressed her “gratitude to him for the gift of this wonderful spiritual practice that he has given to me”, adding that she had never heard him say an unkind thing.

She must answer further questions about her ties to Butler now that a source close to Science of Identity has leaked to me previously unheard audio recordings of her guru describing Muslims in the most viciously racist ways imaginable, alongside what appears to be a 2018 video of Gabbard attending a ceremony in which she and other attendees are seen giving praise to an altar carrying a framed photo of Butler.

The tapes and the accompanying transcripts, which run to more than 8,000 pages, document lectures given by Butler to his flock in Hawaii from the late 1960s to 2006.

In another, he says: “There’s absolutely no value in putting up with this dog shit [Islam] in the name of tolerance.” He then goes on to compare Islam with Communism, arguing that once Communists come to power “you’re dead, you’re finished, you’re gone… It’s the same with the so-called Muslims.”

Butler also falsely claims that Islam spread to India and destroyed Hinduism, contending that “when the Muslim invaders entered India, they engaged in the most demonic of activities” and that “instead of having faith in God, they engage in demonic activism to force people into becoming members of their own team, or their so called religion by force,” including smashing Hindu temples, erecting mosques in their place and “shoving meat into the mouths to make them so-called Muslims, so that they’ll longer be accepted by Hindu society.”

He is also fond of mocking Islamic culture and claims that Muslims are producers of art only because their religion does not permit illustrations of the Prophet Muhammad.

“Muslims make a lot of nice paintings,” he says. “A lot of scribbles! Ever see a Muslim rug? It’s very beautiful, very fancy, all kinds of scribbles. Why? Because they can’t depict anything other than scribbles or they go to jail. They think God is a scribble. When they leave this body, all they’ll see is scribbles and flowers and onions and the sword, of course.”

These tapes make clear that Butler views Islam as a geopolitical threat and a potent source of global instability. And it is through this lens that Butler views all geopolitical struggles, including the 70-year long rivalry between India and Pakistan over Kashmir, claiming: “Now these nut cases are trying to get the atom bomb.

Oh, great! Accept Allah or we blow up your country. There’s only one reason Pakistan hasn’t dropped atom bombs in India? That’s because there are 200 million Muslims still in India. As soon as they leave – BOOM!”

Context is necessary to understand what’s happening between the Zionist occupiers and Palestine. Actually everywhere Israhell goes. For example, 2 days before the Israelis claimed that they were attacked by Hezbollah in 2006, the Israelis had violated Lebanon airspace and dropped bombs. This was not a part of the Israeli timeline and narrative and was not in mainstream news but in the news in Lebanon. I cite this one only because I happened to read it when it was reported. I had learned since that is it the routine for all Israel conflicts. The story starts when Israel wants it to start and the media takes it like they tell it,  just like the Holocaust™. Everything that comes out of Israel is a lie! And the hidden European Zionists attached to it.

#Gaza is under attack right now.
Pray for #Gaza and its Inhabitants???#GazaUnderAttack?? pic.twitter.com/FzUnlZygbh

March 18, 2018
Israeli Air Force strikes Hamas terror target in Gaza Strip
“The attack was carried out “in response to the placement of explosive devices on the border fence. The “IDF” will continue to act using all tools (at US taxpayers expense) at its disposal (that’s the money for our children’s education!) in order to provide security for the citizens of Israel,” said the “IDF” . Hamas is responsible for everything that occurs or comes from the Gaza Strip.”

The hand of Israel is not being ruled out as Hamas announces an inquiry into an explosion that targeted the convoy of the West Bank-based Palestinian prime minister during a visit to the Gaza Strip.

Tuesday’s blast injured several security guards of Rami Hamdallah but left him unharmed during a visit to the Hamas-run territory to open a public-works facility there.

The explosion happened shortly after Hamdallah’s convoy passed through the Israeli-controlled Erez checkpoint, known to Palestinians as Beit Hanoun, in northern Gaza, an Al Jazeera correspondent at the scene reported.

Sources told Al Jazeera that Hamdallah and Ismail Haniya, senior political leader of Hamas, spoke by phone later in the day and agreed that Israel was behind the explosion because it appeared to be the incident’s main beneficiary.