Plan Dalet was an ethnic cleansing plan. It has paved the way for more years of terrorism committed by the so called Israel, which established itself on may 14, 1948. 72 years of abuse and killing against the Palestinians, right in the eyes of the world!#Nakba72#Act4Palestine pic.twitter.com/LY5OHus4P4

The fact that Israeli political leaders across the political spectrum are pursuing annexation is hardly surprising.

Expansionism into Palestinian land is the raison d’etre of the Israeli regime and has been since its foundation.

Israeli settlement building has never ceased since 1948 when the ethnic cleansing of historic Palestine began.

And it was a so-called left-wing Israeli government that spearheaded the settlement enterprise in the West Bank and Gaza following their occupation in 1967.

The Palestinian leadership reacted to these latest developments with more of the same fiery rhetoric and empty threats.

Palestinian Authority (PA) President Mahmoud Abbas once again threatened to “completely cancel” agreements with Israel and the US if Israel proceeded with annexation and warned that Palestinians would “not stand hand-cuffed”.

With the PA highly dependent on the international donor community and the Israeli government for its survival, it is unlikely it will ever be able to present a real challenge to annexation.

Decades of capitulation discussions dressed up as “peace negotiations” have left Palestinians in this historically vulnerable situation.

Indeed, despite the PA president’s bravado, Palestinians are already “hand-cuffed” and caged in an open-air prison where even Abbas himself has to request permission from the Israelis to leave Ramallah.

Further, the COVID-19 pandemic has put Palestinians under lockdown, living in acute fear of infection and unable to put up a significant challenge to the Israeli takeover of their land.

This, however, does not mean the Palestinian people have given in. The struggle against the Israeli regime continues, as do attempts to hold it accountable and make it pay the economic and legal cost of oppression, through the BDS Movement and the International Criminal Court investigation into its war crimes.

This is all important but it is not enough. Now is the time for a refocusing of efforts and a change in political strategy.

Palestinians have to clean up their own house and demand new representative and legitimate leadership which no longer bows down to an international community enabling Israeli expansionism.

While elections are an important democratic practice, in the West Bank and Gaza they would only serve to prop up the current authorities.

What is required is a complete overhaul of the current political system which, for over the last two decades, has been focusing solely on keeping Palestinians subdued and contained.

Such an overhaul requires a return to a revolutionary consensus achieved through plurality and reconciliation of political groups, geographic fragments, and collectives and a popular mobilization around a political agenda of liberation. Only then will we stand a chance to stop the theft of Palestinian land.

Israeli firster Kushner is a big backer of Israeli Apartheid and the Israeli squatter settlements, and for people with his commitments, Muhammed Bin Salman is a godsend. His relationship to Bin Salman is now a threat to US national security.

Since Trump put Kushner in charge of Palestine policy, the administration has 1) moved the US embassy to the disputed city of Jerusalem, 2) cut off funding for the UN Relief and Works Agency that provides aid to millions of Palestinian refugees kicked out of their homes by the Israelis, 3) cut off $5 bn in funding for West Bank development to the US Agency for International Development, and 4) permitted a tripling of Israeli squatter housing units on Palestinian land.

CNN’s Nic Robertson has been informed of the contents of a transcript of the Turkish intelligence recording of the murder of dissident journalist Jamal Khashoggi. He was clearly kidnapped and then strangled. His last words were, “I can’t breathe. I can’t breathe.” The transcript shows that the leader of the assassination team made several phone calls, which Turkish intelligence says went to the Saudi royal court. It also recorded the sounds of a bone saw after the murder.

Kushner famously made a relationship with Bin Salman when he was still third in line to the throne, in spring of 2017, and may have tried to pull strings for his friend so as to slip him into the position of crown prince in summer of 2017. Kushner has stood with Bin Salman through a whole series of crimes, including extorting $100 bn from some 200 fellow princes and his Yemen war that has resulted in starving 85,000 Yemeni children to death. And now the advice to “weather the storm” of being caught red-handed murdering Khashoggi.

Journalism focuses on personalities and often depicts Kushner as a lonely young man eager to have a Saudi BFF. But Israeli journalist Michael Bachner at The Times of Israel has proposed a structural explanation for the link: Bin Salman is using his willingness to throw the Palestinians under the bus as a way of bonding with Kushner and getting the latter’s support in the Trump White House. (Trump has his own reasons for supporting Bin Salman, mainly petroleum and purchases from the US arms industry.) 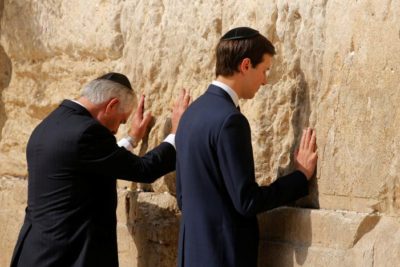 The Trump team has a vision of a ‘deal of the century’ for the Palestinians and Israelis, which appears to simply be a rubber stamp on the Likud Party’s Colonization Project aimed at the Palestinian West Bank, and which is gradually illegally usurping the latter. The Palestinians are weak and relatively poor and helpless, and it is most often the case in history that such people are dealt with horrifically and with impunity.

Since Trump put Kushner in charge of Palestine policy, the administration has 1) moved the US embassy to the disputed city of Jerusalem, 2) cut off funding for the UN Relief and Works Agency that provides aid to millions of Palestinian refugees kicked out of their homes by the Israelis, 3) cut off $5 bn in funding for West Bank development to the US Agency for International Development, and 4) permitted a tripling of Israeli squatter housing units on Palestinian land.

This full court press to crush the Palestinians and leave them with nothing at all is intended to force their acquiescence in permanent Israeli Apartheid rule over them and gradual expropriation of what is left of their land.

Bin Salman told a group of Jewish Americans in New York that he doesn’t care about the Palestinians. There is in fact no good evidence that he cares about anyone at all aside from himself and a couple of cronies. Bin Salman wants to do a deal with Israel whereby it is recognized by the Gulf Cooperation Council states, just as it was recognized by Egypt and Jordan.

But as with Egypt, which negotiated a separate peace with Israel and the US that left the Palestinians in the lurch, Bin Salman is perfectly willing to trade his own security as crown prince for the 5 million or so Occupied and stateless Palestinians. Hence Kushner’s unwavering support for the crown prince, said to be the most vocal and steadfast in the White House.

Kushner is a big backer of Israeli Apartheid and the Israeli squatter settlements, and for people with his commitments, Muhammed Bin Salman is a godsend. His relationship to Bin Salman is now a threat to US national security.

LAGenie Retweeted · 🇵🇸#We_are_Palestine🇵🇸 ✌🇵🇸 @w_palestine
2 days ago
#Gaza is under the Israeli attacks right now at 4:40 AM. Pray for Gaza! 🙏

70
0
LAGenie Retweeted · Mustafa Batnain 🇵🇸 @MustafaBatnain
2 days ago
Dear world,
We are being bombed by Isra*l right now..!
Speak up for Gaza , because media won't. https://t.co/UlyKTT5UmR
View on Twitter
95
0
LAGenie Retweeted · Jenin98 @jenin98
3 days ago
Because you're #Palestinian"!! .
In 2018, a Palestinian girl was able to record this part while she was arrested in Tel Aviv on her way to visit Palestine. She was eventually deported due to her Palestinian background, despite being a #US citizen.
https://t.co/0is8QVEB7Y
View on Twitter
351
0
LAGenie @lagenie24
3 days ago
The Israeli intelligence officers had been arrested while carrying out cross-border security missions. According to the statement, David Ben Rousie is an Israeli scientist in the field of petrochemicals.

https://t.co/9Nu7w8XXvz
View on Twitter
0
0
LAGenie Retweeted · Elaine 🐤🇮🇨 @eiaine
5 days ago
"Ask someone how much a dollar bill is worth and they'll tell you a dollar. Put a gun to their head and ask "Are you sure it's not worth 100 dollars?" and they'll say "Ah yes you're right, my mistake."