Update bottom of page. Looks like the Israelis put their cart before the horse! But I would still rather hear it from the horses mouth, not the PA and not Israel.

So which is it? A government can’t support Palestine and be a friend to Israel at the same time!

Japan is to recognize the State of Palestinian and increase aid to UNRWA, Quds Press reported a senior Palestinian official saying yesterday.

Speaking to media, senior aide to Palestinian Authority (PA) President Mahmoud Abbas, Nabil Shaath, said Japan had pledged to support the Palestinian right to create an independent state with Jerusalem as its capital during the latest talks between the two countries.

Japan, according to Shaath, rejected US President Donald Trump’s recognition of Jerusalem as Israel’s capital. 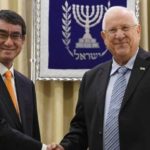 Rivlin yesterday welcomed the Japanese Foreign Minister, Tarō Kōno, on his first-ever official visit to Israel, praising the importance of building a strong relationship between the two countries. During the meeting, the two officials also agreed on strengthening trade and investment relations between their two countries.

Japan is committed to political and economic support of Palestine and has pledged to finance water projects in the Gaza Strip and increasing its financial contribution to UNRWA, in the wake of US funding cuts to the agency. Japan’s move comes weeks after the government of Belgium pledged €19 million ($25 million) to UNRWA over the next three years, in response to the organization’s call for donations following Trump’s dramatic funding cuts.

Japan to recognize Palestine and increase UNRWA funding after US cuts https://t.co/tN11iZoDfp pic.twitter.com/Z4IBNrFcev