Palestinians see in Bolivia, although geopolitically removed from the Middle East, a true friend, and a trusted ally. On the other hand, the resignation of Morales is welcomed news in Tel Aviv. 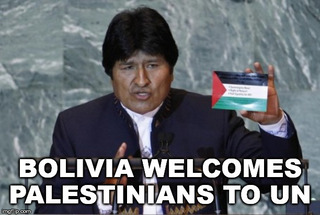 On November 10 Bolivian President Evo Morales, announced his resignation from office following what was described by his deputy, Álvaro García Linera, as a military coup.

Along with late Venezuelan President Hugo Chavez and late Cuban President Fidel Castro, among other socialist or socialist-leaning South American leaders, Morales represented the hope of an entire generation.

All of this came crashing down following the general election in the country on October 20. Morales’ opponents, who have traditionally received strong backing from Washington, accused the president’s camp of rigging the elections.

Following the announcement of the results which gave Morales a 10% point lead over his rival, an orchestrated campaign was launched by the opposition to overthrow the president.

Well-publicized opposition protests resulted in national upheaval, political turmoil, and an army ultimatum to Morales. Fearing further violence and chaos in the country, the president announced his resignation.

It would be safe to argue that this is not the end of Bolivia’s socialism or the people’s-led drive for justice and equality. Bolivia’s grassroots movement is strong and rooted not just in Bolivia itself, but throughout the region and beyond.

This is one of the reasons why Palestinians of all backgrounds are watching the developments in Bolivia with much anxiety and concern.

Palestinians see in Bolivia, although geopolitically removed from the Middle East, a true friend, and a trusted ally. On the other hand, the resignation of Morales is welcomed news in Tel Aviv.

Highlighted below are seven instances where Bolivia, under Morales, showed the type of solidarity with the Palestinian people that was, at times, unparalleled anywhere else in the world:

Even before Bolivia officially recognized Palestine, on January 14, 2009, it cut ties with Israel. Later that same day, Venezuela followed suit. The Bolivian decision was made in response to the destructive Israeli war on Gaza, known as Operation Cast Lead. At the time, Morales called for the stripping of the Israeli President Shimon Peres, of his Nobel Peace Prize due to his support of the Israeli crimes in the besieged Gaza Strip.

On December 22, Morales followed his decision of severing ties with Israel with officially recognizing the State of Palestine as an independent and sovereign State. The Bolivian move was clearly part of a coordinated South American effort to show greater solidarity with the Palestinian people, as it came at the heels of a similar decision made by Brazil and Argentina.

On July 30, 2014, President Morales went further by declaring Israel a “terrorist state”, following the latter’s most recent war on the Gaza enclave. Morales’ statement was not mere rhetoric as it was coupled with concrete steps to hold Israel accountable for its crimes against occupied and besieged Palestinians. On that day, Bolivia also classified Israel as a “group 3” country, which means that any Israeli wanting to visit Bolivia needed to obtain a visa that required the approval of the National Migration Administration.

When Bolivia assumed the presidency of the United Nations Security Council in June 2017, it declared Palestine a top priority on its political agenda. “Our priorities: conflict in the Middle East of 50 years of the occupation of Palestine, and non-proliferation of chemical and nuclear weapons,” President Morales tweeted at the time.

On May 15, 2018, the Bolivian ambassador to the United Nations registered one of the most symbolic, yet emotive gestures of solidarity towards Palestine that was ever displayed at international institutions. Sacha Llorenti started his talk at a UN emergency session by naming all 61 Palestinians killed by Israel in Gaza’s Great March of Return. The Palestinian victims were all killed in non-violent popular protests that demanded an end to the Israeli siege on Gaza.

On June 22, 2019, Bolivia sealed its solidarity with the Palestinian people with the signing of the development cooperation agreement between the two countries. Although free trade and cooperation between both economies is not an easy task, if at all possible, considering that Palestine is under total Israeli control, the agreement was a natural and organic evolution of the political support and the grassroots solidarity with Palestine that has been in the making for many years.

It would be untenable to discount the power of the indigenous movement of Bolivia despite Morales’ abrupt resignation. It would be equally wrong to conclude that the absence of Morales would automatically sever the strong rapport predicated on people’s solidarity and common struggle between Palestine and Bolivia.