Maddow goes on a ten-minute rant about a Pepe! Meme Magic 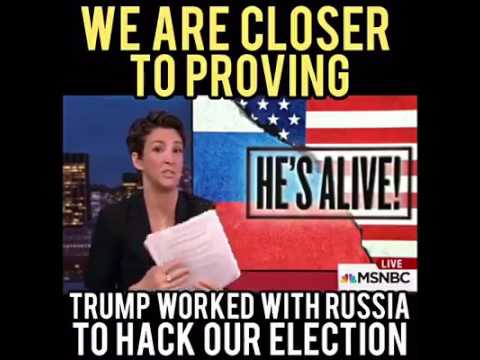 The evidence is damning. And the silence underscores the arrogance.

More than seven weeks after a devastating report from the media watch group FAIR, top executives and prime-time anchors at MSNBC still refuse to discuss how the network’s obsession with Russia has thrown minimal journalistic standards out the window.

● “Moreover, in all of 2017, MSNBC only aired one broadcast on the U.S.-backed Saudi airstrikes that have killed thousands of Yemeni civilians. And it never mentioned the impoverished nation’s colossal cholera epidemic, which infected more than 1 million Yemenis in the largest outbreak in recorded history.”

● “All of this is despite the fact that the U.S. government has played a leading role in the 33-month war that has devastated Yemen, selling many billions of dollars of weapons to Saudi Arabia, refueling Saudi warplanes as they relentlessly bomb civilian areas and providing intelligence and military assistance to the Saudi air force.” Why put your name on another unpopular war, when your proxy can do it for you? Instead of initially intervening itself, the Pentagon has dispatched its own Arab proxy army in the region to the highly unpopular dirty deeds that Washington normally does. What’s the difference, after all, Saudi Arabia and Qatar are two of the Anglo-American Military Industrial Complex’s best customers – flying all US jets and using all US satellite intel to help select defenseless targets inside Yemen.

Meanwhile, MSNBC’s incessant “Russiagate” coverage has put the network at the media forefront of overheated hyperbole about the Kremlin. And continually piling up the dry tinder of hostility toward Russia boosts the odds of a cataclysmic blowup between the world’s two nuclear superpowers.

In effect, the programming on MSNBC follows a thin blue party line, breathlessly conforming to Democratic leaders’ refrains about Russia as a mortal threat to American democracy and freedom across the globe. But hey—MSNBC’s ratings have climbed upward during its monochrome reporting, so why worry about whether coverage is neglecting dozens of other crucial stories? Or why worry if the anti-Russia drumbeat is worsening the risks of a global conflagration?

FAIR’s report, written by journalist Ben Norton and published on Jan. 8, certainly merited a serious response from MSNBC and the anchors most identified by the study, Rachel Maddow and Chris Hayes. Yet no response has come from them or network executives. (Full disclosure: I’m a longtime associate of FAIR.)

In the aftermath of the FAIR study, a petition gathered 22,784 signers and 4,474 individual comments—asking MSNBC to remedy its extreme imbalance of news coverage. But the network and its prime-time luminaries Maddow and Hayes refused to respond despite repeated requests for a reply.

The petition was submitted in late January to Maddow and Hayes via their producers, as well as to MSNBC senior vice president Errol Cockfield and to the network’s senior manager in charge of media relations for “The Rachel Maddow Show” and “All In with Chris Hayes.”

Signers responded to outreach from three organizations—Just Foreign Policy, RootsAction.org (which I coordinate), and World Beyond War—calling for concerned individuals to “urge Rachel Maddow, Chris Hayes, and MSNBC to correct their failure to report on the humanitarian catastrophe in Yemen and the direct U.S. military role in causing the catastrophe by signing our petition.” (The petition is still gathering signers.)

As the cable news network most trusted by Democrats as a liberal beacon, MSNBC plays a special role in fueling rage among progressive-minded viewers toward Russia’s “attack on our democracy” that is somehow deemed more sinister and newsworthy than corporate dominance of American politicians (including Democrats), racist voter suppression, gerrymandering and many other U.S. electoral defects all put together.

At the same time, the anti-Russia mania also services the engines of the current militaristic machinery.

It’s what happens when nationalism and partisan zeal overcome something that could be called journalism.

“The U.S. media’s approach to Russia is now virtually 100 percent propaganda,” the independent journalist Robert Parry wrote at the end of 2017, in the last article published before his death. “Does any sentient human being read the New York Times’ or the Washington Post’s coverage of Russia and think that he or she is getting a neutral or unbiased treatment of the facts?”

Parry added that “to even suggest that there is another side to the story makes you a ‘Putin apologist’ or ‘Kremlin stooge.’ Western journalists now apparently see it as their patriotic duty to hide key facts that otherwise would undermine the demonizing of Putin and Russia. Ironically, many ‘liberals’ who cut their teeth on skepticism about the Cold War and the bogus justifications for the Vietnam War now insist that we must all accept whatever the U.S. intelligence community feeds us, even if we’re told to accept the assertions on faith.”