We will sustain our pressure. We will continue to protect the American people and American interests by any means necessary. And we will continue to impose costs on the regime for its campaigns of carnage. That’s real American leadership to confront #Iran.

Moscow has repeatedly warned that Washington is trying to incite a new arms race. It points to the undoing of arms controls treaties and the US weaponization of outer-space as evidence of such an agenda of provoking global insecurity.

The Pentagon confirmed this week that it has, for the first time, armed some of its submarines with long-range nuclear missiles which have a lower destructive power compared with existing warheads. These so-called “mini-nukes” represent – despite the diminutive-sounding name – an increased risk of nuclear war.

The newly deployed W76-2 warhead fitted to the Trident missile system is reported to have an explosive yield of five kilotons, or about 1 per cent of the existing W76-1 weapon.

The supposed lower-yield weapon is nevertheless an instrument of immense mass destruction, equivalent to approximately a third of the power of the bomb the US dropped on Hiroshima in August 1945 which killed tens of thousands of people.

That puts in perspective the seemingly more usable “mini-nuke” missile.

However, with Dr Strangelove-type logic, Pentagon official John Rood, claimed the new device “would make Americans safer because it would deter the danger of nuclear war happening.” He also reportedly cited the weapon as a deterrent against alleged Russian aggression.

(It is lamentable, if not absurd, how American officials incorrigibly portray Russia as a bogeyman. When will they ever evolve?)

The official US reassurance is not the view of the US-based Bulletin of Atomic Scientists who said the deployment of such weapons actually increases the risk of an eventual nuclear war.

This is because the lower-yield W76-2 launched from US Ohio-class submarines will be indistinguishable from the existing Trident warheads. Therefore the danger of escalation to all-out nuclear war is increased.

Russia also condemned the US move. Sergei Ryabkov, Deputy Foreign Minister, said: “The US is actually lowering the nuclear threshold and conceding the possibility of waging a limited nuclear war and winning this war… this is extremely alarming.”

What is doubly perplexing is the wider context in which the Trump administration has abnegated arms controls treaties. Last year, the administration walked away from the Intermediate-range Nuclear Forces (INF) treaty, governing the use of short-range, or tactical, nuclear missiles.

So far, Washington has shown every indication that it has no intention to extend the New START accord with Russia governing long-range strategic weapons, which is due to expire next year.

The deployment of low-yield nuclear weapons as part of the strategic arsenal is bound to destabilize the global strategic balance.

Moscow has repeatedly warned that Washington is trying to incite a new arms race. It points to the undoing of arms controls treaties and the US weaponization of outer-space as evidence of such an agenda of provoking global insecurity.

It is tempting to speculate that the US is reacting to Russia’s development of hypersonic non-nuclear weapons which are said to be able to evade any anti-missile defense system. Moscow maintains that its arsenal is predicated on a doctrine of self-defense and not a first-strike objective.

The use of conventional bombs masks the use of the nuke bomb. The combined and simultaneous use of both types of bombs produces a confusing and complex picture.

In any case, it seems that the US having realized that it has lost out to Russia in development of hypersonic non-nuclear weapons has taken the tack of expanding its nuclear options. That move overturns decades of declared non-proliferation commitments.

It should also be noted that this week the Kremlin disclosed that an urgent call issued by Russian President Vladimir Putin for the five permanent members of the UN Security Council to convene a summit in order to address international peace has so far been ignored by Washington.

Last month, at a Holocaust memorial in Israel, Putin repeated a proposal for the UN founding powers – the US, Britain, France, Russia and China – to consolidate efforts for strengthening global security, non-proliferation and arms controls. This week, the Kremlin said this call has not received any response from the US (or the UK) to participate in such a forum.

Furthermore, next month sees one of the biggest-ever NATO war maneuvers in Europe, including a massive trans-Atlantic deployment of US forces. Russia’s Ministry of Defense has deprecated the huge mobilization as being akin to a rehearsal for an invasion of Russia.

President Donald Trump has previously stated his abhorrence of nuclear war and has called for negotiation of a new comprehensive arms control treaty between the US, Russia and China.

All empirical evidence shows that American rhetoric is completely and contemptibly detached from the reality of its threatening practices. The world is moving towards more insecurity and risk of catastrophic war. And the fault of that damnable dynamic lies entirely with Washington. 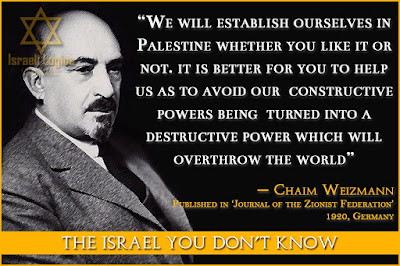 “A DESTRUCTIVE POWER WHICH WILL OVERTHROW THE WORLD.” With enough power to overthrow the world, ‘constructive power’ doesn’t mean for the rest of us.

“I think the Israelis have just lied to us like horse thieves on this thing, they have completely distorted, misrepresented, and falsified the facts in the past. I think it is very serious and which they have consistently, and with a completely straight face, denied to us they were building.”
The powerful senator also knew that he was just blowing off steam in a secret hearing. No one in the lame-duck Eisenhower
administration was going to do anything more to take on Israel.
The Samption Option

Netanyahu used a visit to an Israeli atomic reactor to warn Iran and others that Israel has the means to destroy them. “Our enemies know very well what Israel is capable of doing.” He said that the weak are slaughtered and erased from history…

Speaking at Israel’s main nuclear weapons facility on August 29, Israeli Prime Minister Benjamin Netanyahu announced: “Our enemies know very well what Israel is capable of doing. They are familiar with our policy. Whoever tries to hurt us – we hurt them.”

Reuters reports that Netanyahu “used a visit to a secretive Israeli atomic reactor on Wednesday to warn the country’s enemies that it has the means to destroy them, in what appeared to be a veiled reference to its assumed nuclear arsenal.”

Israel is the only nuclear power in the Middle East.

The country is reported to have between 100 and 400 nuclear weapons. While Israel has never officially admitted this fact, Israeli leaders periodically threaten their use. In 1973, when Israel was losing what it calls the “Yom Kippur War,”  Defense Minister Moshe Dayan came close to using nuclear weapons, until U.S. Secretary of State Henry Kissinger engineered a massive airlift of U.S. weaponry to Israel, the largest airlift in U.S. history.

During Wednesday’s speech at Israel’s notorious Dimona nuclear facility, Netanyahu said: “I am not spouting slogans. I am describing a persistent, clear and determined policy. This is our policy. It is backed by appropriate deployment, equipment, preparedness and – in the hour of need – appropriate orders.”

“In the Middle East, and in many parts of the world,” Netanyahu said, “there is a simple truth: There is no place for the weak. The weak crumble, are slaughtered and are erased from history while the strong, for good or for ill, survive.” The way to “peace,” he said, was for Israel to be strong.

While Netanyahu said Israel has “many enemies,” the speech particularly focused on Iran. Netanyahu said that Israel is “working against Iran establishing a permanent military presence in Syria.”

“We will not relent in pursuit of this goal,” Netanyahu said, ” just as we did not relent in bringing about the cancellation of the bad nuclear agreement with Iran, a goal which was seen as impossible when I put it on the international agenda for the first time several years ago.”

On May 8th, President Trump pulled out of the Iran agreement, a move promoted by Israel partisans in and out of his administration.

Unlike Israel, Iran has no nuclear weapons. And, despite oft-repeated claims by Netanyahu, U.S.politicians, and many in the American media, U.S. intelligence agencies and others have concluded that Iran is not working to acquire them. Iran, unlike Israel, is a signatory to the nonproliferation agreement.

The 1976 Symington and Glenn Amendments to the Foreign Assistance Act prohibit U.S. aid from being given to countries that have not signed the nuclear nonproliferation agreement.

Senator Stuart Symington, who had earlier been Secretary of the Air Force, explained: “In effect, this amendment says to other nations, if you wish to take the dangerous and costly steps necessary to achieve a nuclear weapons option, you cannot expect the United States to help underwrite that effort indirectly or directly.”

U.S. governmental agencies had long suspected Israel of having a nuclear program, despite Israel’s lying about it to the U.S. In 1961 an infuriated U.S. Senator exploded at a secret session of the Senate Foreign Relations Committee:

“I think the Israelis have just lied to us like horse thieves on this thing. They have completely distorted, misrepresented and falsified the facts in the past. I think it is very serious, for things that we have done for them to have them perform in this manner in connection with this very definite production reactor facility [meaning it was specifically designed to produce plutonium] which they have been secretly building, and which they have consistently, and with a completely straight face, denied to us they were building.”

Public evidence of Israeli weapons finally became available in 1986 when the London Times published information from Israeli whistleblower Mordechai Vanunu. (Vanunu was kidnapped by Israel and imprisoned for 18 years, 12 of them in solitary detention.”)

Despite that fact, U.S. aid to Israel has continued. According to the think tank Research: MIddle East Policy, Israel has so far received approximately $234 billion in illegal aid.

A package to give Israel $38 billion over the next ten years is currently before Congress, the largest such aid package in U.S. history. So far, U.S. media have failed to tell Americans about the legislation.

Aid to Israel is also illegal under the Leahy Laws, which prohibit U.S. aid to countries guilty of human rights violations.

Alison Weir is executive director of If Americans Knew, president of the Council for the National Interest, and author of Against Our Better Judgment: The Hidden History of How the U.S. Was Used to Create Israel.

52
0
LAGenie Retweeted · tim anderson @timand2037
4 days ago
Compare US police state racist and inhuman tactics with those of the colonists in occupied #Palestine https://t.co/KCwXm2erNa
View on Twitter
413
0
LAGenie Retweeted · True Torah Jews @TorahJews
7 days ago
It's no news that Jews & Muslims lived in peace for 100s of years. Not only were we not enemies, but rather came together as friends.