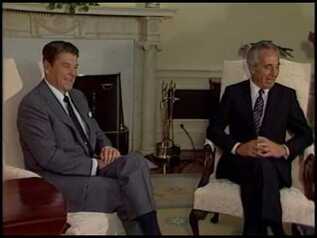 Zionist /Israelis are con artists by nature, no one is exempt from their cons, not even presidents.

In his new autobiography, former president Ronald Reagan says Israel was the instigator and prime mover in the Iran-contra affair.

He blames the Israelis for misleading him into believing he was selling arms to so-called Iranian moderates when some “may have had links to the Ayatollah Khomeini’s government and were trying to obtain weapons under false pretenses.”

“Prime Minister Shimon Peres was behind the proposal,” the former president says.

Iranian middlemen endorsed by Israel helped “win the freedom of three hostages,” Reagan adds, but the same middlemen “behaved at times like bait-and-switch con men . . . with the sole intention of profiteering.”

Israeli military advisors — mercenaries from Spearhead, the firm whose personnel operated with the permission of the Israeli authorities — aided Guatemala’s dictator, General Efrain Rios Montt. In 1982, they participated in one of his worst crimes: the “Plan Victoria” scorched earth campaign. The Guatemala Embassy in Washington admitted that “personnel sent by the Israeli government were participating in the repopulation and readjustment programmes for those displaced as entire villages vanished.”

“Vanishing” entire villages, of course, is something of an Israeli speciality. During the 1948 ethnic cleansing of Palestine, Zionist militias bulldozed and dynamited their way through as many Palestinian villages as they possibly could, having already driven out or slaughtered their inhabitants. More than 500 Palestinian towns and villages were wiped off the map in this way. The demolition of Palestinian property continues to be an Israeli tactic to clear the occupied territories of the indigenous population.

Staged event : Reagan did NOT deliver this speech at the Republican National Convention in San Francisco. He taped it on a soundstage in Hollywood, California.

Ronald Reagan delivers his “A Time for Choosing” speech in support of Senator Barry Goldwater in the waning days of the 1964 general election. “The Speech” as it is also known launched Reagan’s political career. Two years after this film was broadcast on NBC on October 27, 1964, he was elected governor of California.