Stoltenberg’s raving ego and vanity have just been fed by the witless ovations of the US Congress, much as US President Woodrow Wilson, a century ago reveled in the adulation of the crowds of Europe as his own mad, megalomaniacal policies sold them down the river for 30 more years of war, poverty, fear, conquest and death.

An advocate for democracy and world peace, President Wilson led the United States into an unnecessary and disastrous war via false flag event. World War I has been called “probably history’s worst catastrophe.” Under Wilson, passed legislation establishing the Jewish Federal Reserve and additionally, Wilson nominated the first Jewish person to the U.S. Supreme Court, Louis Brandeis (1856-1941), who was confirmed by the Senate in 1916.

Satan, we read in the second verse of the second chapter of the Biblical Book of Job, can never just relax and take it easy. He is always on the go, always looking for more trouble to stir up.

“And the LORD said unto Satan, From whence comest thou? And Satan answered the LORD, and said, From going to and fro in the earth, and from walking up and down in it.”

And so it is with NATO Secretary-General Jens Stoltenberg. A veteran prime minister of Norway for eight years and political head and chief mouthpiece for the Atlantic Alliance for the past half-decade, he started the month of April addressing a Joint Session of both chambers of Congress in Washington, an honor given to no previous head of the alliance in the past 70 years. 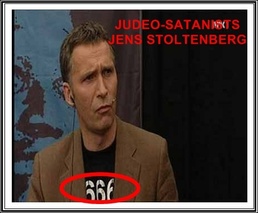 Not content to rest on these laurels he went on later in the month to publci boast how NATO “increased its naval presence in the Black Sea, with NATO’s maritime groups taking part in exercises and also conducting several port visits” including to Georgia and Ukraine.

He called on Russia to “respect international law” so as to “make the waters of the Black Sea more secure”, according to a CaucasusWatch.de report.

And to prepare for his epochal address to Congress, Stoltenberg ended the month of March attending military exercises in Georgia, a very small, extremely unstable state embraced and supported by both the US government and NATO despite its record of violent conflicts and oppression of minorities since achieving independence following the end of the Soviet Union.

Georgia’s military strength is derisory. It has an armed land force of only 37,000 men. The effective combat strength of the Georgian Air Force is a dozen old Sukhoi combat jets. 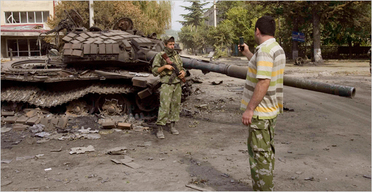 The idea that bringing Georgia into NATO could somehow increase the deterrent and military strength of the alliance is a ridiculous joke.

It would simply further weaken the already alarmingly-overstretched US armed forces at a time when Washington is losing the only serious land military power apart from tiself in all of NATO, Turkey.

Georgia is no Turkey: Comparable to Estonia, maybe. But Stoltenberg cannot tell the difference between any of them.

His own background showed no serious engagement whatsoever with strategic issues, as one might expect from a small, usually peaceful and secure nation like Norway.

The illusion of being one of the powerful and mighty of the world has clearly bred in him extremely dangerous, albeitabsurd delusions. 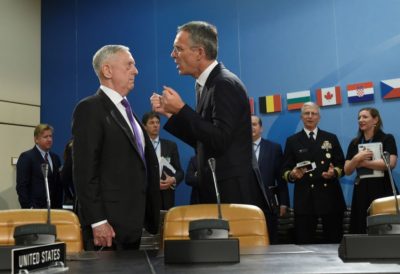 Indeed, in the only serious life-or-death security crisis Stoltenberg has ever had to face, he and his government proved utterly worthless.

On July 22, 2011, Anders Behring Breivik, a hate crazed young Norwegian neo-Nazi, singlehandedly paralyzed the national security services by setting off a bomb near the prime minister’s house in Oslo that killed eight people.

Amid the confusion, Breivik then traveled out to a youth camp of Stoltenberg’s own ruling Labour Party on a nearby island where he massacred 69 people, almost all of them teens or in their early 20s.

There was not a single armed security guard on the island. It was the worst mass killing in Norwegian history. Stoltenberg had been prime minister for seven years:  The appalling state of the security services and of security for the summer camp for the children of his own followers were his responsibility as national chief executive and party leader.

He was even due to give a speech at the camp the next day and was preparing it while the young people were being slaughtered. He was never held responsible for his shameful bungles.

The idea that such a man could raise dup only two years later to lead the largest and most wide-reaching military alliance in European history boggles the mind.

Once head of NATO, Stoltenberg underwent a predictable transformation: The lifelong anti-war dove who had protested the Vietnam War in his youth, overnight became an armchair war hawk.

Today, Stoltenberg is all for sucking both Ukraine and Georgia – weak, unstable and violent states lastingly destabilized by US and Western coups – into his (supposedly) mighty NATO.

Stoltenberg’s raving ego and vanity have just been fed by the witless ovations of the US Congress, much as US President Woodrow Wilson, a century ago reveled in the adulation of the crowds of Europe as his own mad, megalomaniacal policies sold them down the river for 30 more years of war, poverty, fear, conquest and death.

Today, Stoltenberg’s capacity to wreak catastrophe is even greater. With him on the job, a lot more people than Job will suffer at the hands of Satan.

A crucial position that could be used to work for lasting peace and mutual understanding between East and West has fallen instead into the hands of one of T S Eliot’s Hollow Men: A ludicrous and contemptible phony whose witless posturing threatens to incinerate the human race.