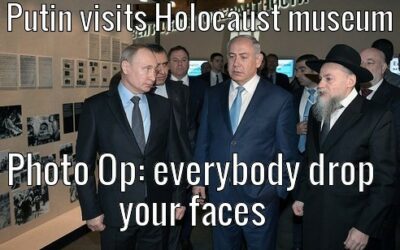 “We may not forget the horrors of the Holocaust, and we must remember the heroism of its opponents. There is no forgiving what the Nazis did.”

Putin knows the Jews are responsible for ww2 and everything that happened in it. And of course he knows all about 9/11 and used it to his advantage. It’s the silly pr games that always disgusts me.

One of the most important world leaders to maintain close ties with Chabad is Russian President Vladimir Putin. Rabbi Krinsky says that in conversations with Putin, the Russian leader asked him where in Russia his parents were from originally.

“He said he grew up in St. Petersburg, in a Jewish area, and he was the Shabbos goy. He didn’t use that term. [He said] he knew all about it. He said about Chabad, he knows Chabad is very active. He spoke about Chabad like a shaliach.”

Russian President Vladimir Putin Dedicates Holocaust Memorial – The impressive monument was erected in the plaza of the Jewish Museum, which has become a magnet for thousands of visitors each week. There they can learn about, and receive a comprehensive picture of, the Jewish people throughout the generations, all the way up to the current revival and renaissance of Judaism throughout the vast country of Russia. 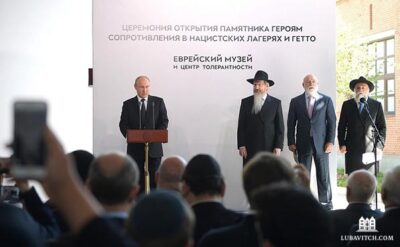 Russian President Vladimir Putin Dedicates Holocaust Memorial – President Putin declared: “We will not allow the rekindling of anti-Semitism and nationalism. We may not forget the horrors of the Holocaust, and we must remember the heroism of its opponents. There is no forgiving what the Nazis did.”

41
0
LAGenie Retweeted · Cynthia McKinney PhD @cynthiamckinney
23 hours ago
Message sent in love to my brothers and sisters in Africa: PLEASE DO NOT TAKE ANY COVID-19 VACCINE. WHY ARE THEY STARTING WITH YOU? DON'T BE GUINEA PIGS FOR ENGINEERED DISEASES FROM THE WEST. https://t.co/wLdpLTfpF4
View on Twitter
280
0
LAGenie Retweeted · Muhammad Smiry 🇵🇸 @MuhammadSmiry
23 hours ago
The occupied PALESTINE https://t.co/TTjilDORNh
View on Twitter