“Jews are responsible for every single thing wrong in this world until proven otherwise.”

<They have been responsible for mass migrations since ww2> 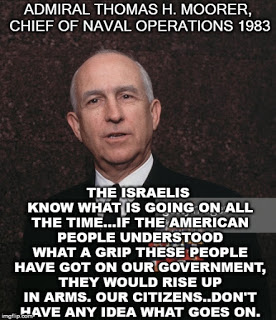 Honduras and Guatemalan presidents, where the migrants are coming from, are friends of Israel, they cooperate with whatever the (anti-semitic, Jewish cabal) wants.

Nixon:Generally speaking, you can’t trust the bastards. They turn on you. Am I wrong or right?

There’s disturbing new footage showing a Jewish Star of David coming out of the Zacapa, Guatemala “caravan” migration of illegal aliens attempting to forcefully violate the Immigration and Naturalization Act of the United States of America. 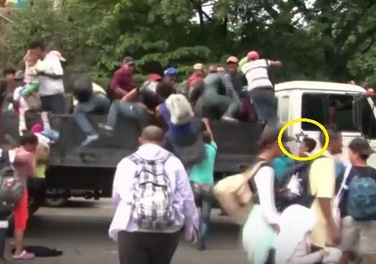 Original footage broadcast by Canadian Broadcasting Company (CBC), October 2018. A Star of David is emblazoned on the door panel of a truck transporting a load of Honduras who are making their way through Guatemala towards the USA.

The Israeli truck has stirred controversy on social media, with allegations of forced-migrant assistance being given on behalf of “our greatest ally.”

These tactics are not new and have been used many times, including in Europe: to mobilize millions of people from the most poverty-stricken countries in the world and have them invade the country, using children as their shields, and then use these people in their own political games to protect their political interests in this country. 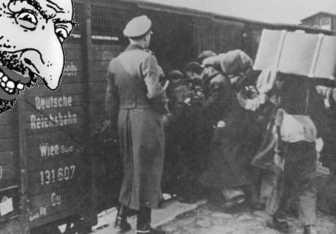 Assimilated and religious Jews who did not serve the bankers’ interests were the main victims of Nazi persecution. Zionists, on the other hand, were spared. These same Zionists put ordinary Jews on trains to Auschwitz telling them they were being “resettled.” Whoever changed their minds were spirited away to Palestine by ready-Zionists. The Jews were ’emptied’ from Europe.

There’s nothing surprising in this fact. What is surprising is that they broke their taboo in the mainstream media to reveal Israel’s role in this process, although they’ve been talking about in alternative media for a long time already.

The Trump administration says the United States is currently facing a crisis as the number of people arriving at the southwest border increases month to month and outpaces apprehensions from last fiscal year.

Based on recent unannounced visits to Border Patrol facilities, government investigators have flagged serious concerns about overcrowding and prolonged detentions at these locations, saying the conditions “represent an immediate risk to the health and safety” of immigration officials and detainees.

The findings in the investigative reports and photos have renewed criticism of the Trump administration’s detention practices.

Who oversees the detention of immigrants? 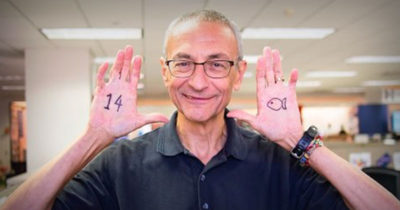 Once in federal custody, immigrants are held in a variety of facilities led by different agencies — from processing centers operated by Customs and Border Protection, to detention facilities run by Immigration and Customs Enforcement, to shelters for children under the supervision of the Office of Refugee Resettlement within the Health and Human Services Department.

People held by ICE are either awaiting deportation or a decision on their immigration case. They are held throughout the country, including in federally-owned centers, contracted county jails, and contracted facilities owned by private prison companies.

The average daily population in ICE detention fluctuates and was around 45,000 people as of March 2019.

Immigration officials refer children apprehended at the border to the Office of Refugee Resettlement, an agency that is part of HHS. Each year, the office oversees tens of thousands of migrant children, most of whom have come alone without a parent or guardian.

Private companies, as well as nonprofits, can be contracted by the government to run facilities holding migrant children. For instance, Caliburn International, a private for-profit company, runs a center in Homestead, Fla.

A Texas nonprofit recently was announced to have received a $300 million contract to run a new temporary shelter for child migrants in Carrizo Springs, Texas, and provide 1,300 beds, according to a notice published July 2, 2019, in the Federal Register.

What have investigators said about conditions at ICE facilities?

The U.S. government is responsible for ensuring that facilities contracted by ICE adhere to federal standards guiding the care and treatment of migrants. Over the years, the Office of Inspector General within the Department of Homeland Security has highlighted poor conditions and violations of standards at some federally-run and contracted facilities.

In 2017, investigators examined whether ICE immigration detention inspections ensured adequate oversight and compliance with detention standards. Contracted facilities were part of the scope, according to the inspector general report published June 2018.

The report concluded that ICE wasn’t adequately monitoring facilities and that its “difficulties with monitoring and enforcing compliance with detention standards stretch back many years and continue today.”

Other groups outside the government have also flagged issues at ICE facilities.

“From facility to facility, their stories are remarkably similar accounts of abuse, neglect and rights denied — symptoms of an immigrant detention system where the failures of the nation’s immigration system intersect with the failures of its prison system,” the Southern Poverty Law Center said in a 2016 report.

What are the conditions in child migrant centers?

Migrant children spend an average of fewer than 45 days at children’s shelters, according to a frequently asked questions page on the Office of Refugee Resettlement website, last reviewed May 15, 2019.

Patrick Fisher, a public affairs and media specialist of the Administration for Children and Families at the Department of Health and Human Services, told PolitiFact that all care providers, including the Homestead Temporary Shelter in Florida for unaccompanied children, are required to “report incidents affecting a child’s health, well-being and safety,” and specifically “significant incidents.”

The latter include “verbal threats by one youth against another youth to physical altercations or allegations of sexual abuse.”

Several Democratic presidential candidates went to the Homestead center (although they were not allowed to enter) at the time of the presidential debates in Miami, amid demands for its closure.

The center in Homestead, which is holding 2,300 children of its 3,200 capacity, is a temporary influx shelter. Another is slated to open in Oklahoma at a facility that was the site of a World War II internment camp, according to CBS News.

Trump signed a $4.5 billion humanitarian aid bill into law July 1, 2019. The bipartisan bill divvies up the appropriations by the agencies that will implement the law, which are those within the Justice Department, DHS, and HHS.

Some of that funding specifically goes to getting children out of large-scale shelters faster.

The bill’s chances of getting through the Republican-controlled Senate, however, are low.

In addition to that bill, the House Oversight and Reform Committee will hold hearings on the separation and treatment of migrant children, according to a statement by the committee.

“The committee needs to hear directly from the heads of these agencies as soon as possible in light of the almost daily reports of abuse and defiance,” said Rep. Elijah E. Cummings, D-Md., chairman of the committee.

What are President Donald Trump’s plans for immigration detention?

Trump’s approach is at odds with that of House Democrats. As part of his hard-line approach to immigration, Trump seeks to increase detention space to keep more migrants in custody. Lack of detention space has consistently been one of the reasons why immigration authorities release immigrants.

Trump’s fiscal year 2020 budget plan asks for $2.7 billion for 54,000 detention beds and requests the creation of a Border Security and Immigration Enforcement Fund.

The fund would be used to expand immigration detention capacity to 60,000 beds (including 10,000 family detention beds) and to hire more staff to enforce and litigate immigration laws. 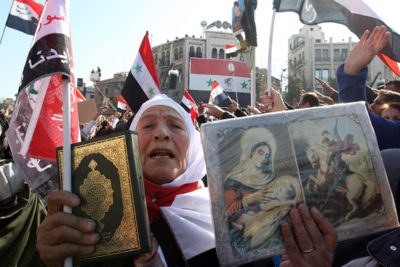 Muslims are not enemies of the Christians, they are very much bonded in the Middle East and elsewhere. Muslims love Jesus as part of the 3 faiths of Abraham, which includes the Jews. The Quran instructs Muslims to protect the 3 faiths and peoples. Although THESE Jews are not their cousins!

Could there be any more proof that al-Qeida-Daesh- ISIS -ISIL- Islamic State was created, funded and protected by the US? They only killed Muslims and Christians and were instructed to destroy historical sites for pure Zionist spite.  The same Zionist spite that destroys historic Palestine.  Superficial Israel goes untouched. Now ISIS etal is on the run without the protecting US forces to keep them intact. Looks like the same fate has befallen the Kurds.

MOSCOW (Sputnik) – The withdrawal of US troops from Syria may reveal the war crimes of the international coalition committed in the war-torn country, in particular, during the operation to liberate the city of Raqqa, a military-diplomatic source said. 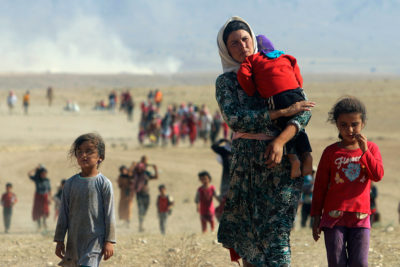 Weapon of mass destruction. The Zionist cabal aims to mix up cultures, dilute and destroy the 3 abrahamic faiths so that the people have no loyalties as they are slaves to the Zionist fake Jews (Rothschild). This is the New world order.

“The upcoming withdrawal of US military personnel from Syria will most likely shed light on numerous war crimes committed by the ‘international coalition’ during the so-called fight against the Islamic State* terrorist group. First of all, this concerns, of course, the much hyped liberation of Raqqa in October 2017, which has transformed into a ‘ghost city’ as a result of carpet bombings by coalition aircraft”, the source said. 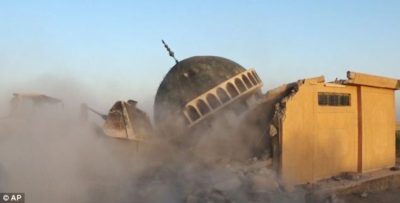 ISIS demolish ancient mosques and temples in western Iraq. They destroyed churches, killed both Christians and Muslims. No Jews.

Following the announcement of US plans to withdraw troops from Syria, the militants operating in Al-Tanf are making constant attempts to force their way out of the area to adjacent regions of the country and even to neighbouring Jordan, a military-diplomatic source said.

“After the announcement of the imminent withdrawal of the US military, the entire ‘hive’ of the militants there… was set in motion. Almost every day, the militants attempt to break through from there not only to the territory controlled by Damascus in Syria, but also to Jordan”, the source said.

The source added that the heavy smoke around the Rukban refugee camp in Al-Tanf could indicate that the militants are burning the corpses of refugees, who have perished from hunger and diseases due to the shortage of humanitarian aid supplies.