This is not about electability, but complicity in crimes against humanity, and American voters have every right to raise their standards.

While co-hosting an interview on the Palestine Chronicle, I asked Dr. Richard Falk, former UN Special Rapporteur on Palestinian human rights, about his thoughts on Kamala Harris’ promise to maintain unconditional aid to Israel.

“I am disappointed of course by the Harris-Biden positions on Israel. I would have hoped for something closer to what Bernie Sanders was saying as a way of shifting the policies closer to what I think a majority of American people would support and want.”

Possibly on the annexation issue…but I am not very optimistic that there will be any changes.”

Once again, this presidential election cycle has given American voters once again a choice: the lesser of two evils.

Yet, in this election, it is particularly difficult to differ between the two candidates, especially their attitudes towards the Israeli occupation and American responsibilities towards the former, being their military’s largest sponsor.

Notably, the “progressive” Biden does not have a discourse which is more developed than his conservative opponent.

In July, he ordered the removal of any reference to the “Israeli occupation” from his campaign platform in July, in contradiction with international recognition of Israel as a belligerent occupation.

Progressive Americans organized against the Trump administration for his frequent violations of constitutional law and lack of human rights standards, domestically and internationally.

Many have missed that Biden has already committed to campaign promises which guarantee not only a lack of regard for international law, but guarantee his violations of U.S. law.

Tony Blinken, Joe Biden’s senior advisor, stated: “He [Biden] would not tie military assistance to Israel to any political decisions that it makes. Period. Full stop. He said it; he’s committed to it.”

Of course, Kamala Harris has reaffirmed the sentiments communicated by Blinken. Harris stated in an virtual event on August 26th: “Joe (Biden) has made it clear he will not tie security assistance to any political decisions that Israel makes, and I couldn’t agree more,”

These various statements should have struck many as more problematic than they did.

After all, they are pledging to break the law for Israel.

In 1998, the first of what are known as the Leahy Laws were established by Vermont Senator, Patrick Leahy.

“Cruel, inhumane, or degrading treatment or punishment; prolonged detention without charges and trial; causing the disappearance of persons by the abduction and clandestine detention of those persons; and other flagrant denial of the right to life, liberty, or the security of person.” 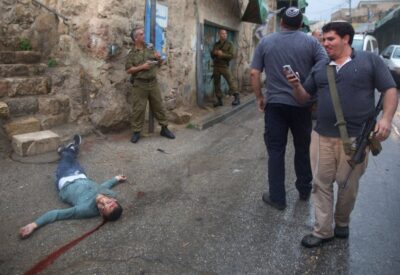 Since 1946, the American government has provided billions in military aid to Israel, as well billions in loan guarantees to help Israel develop its qualitative military edge which it uses to almost exclusively torment and slaughter Palestinians in Gaza and the West Bank.

Whether that be to fund Israeli prisons, where an approximate 700 Palestinian children are prosecuted each year, over 75% of whom report being tortured and physically abused, the white phosphorus which rains over Gaza, or the bullets that murder and disable thousands of peaceful Palestinian demonstrators.

In theory, a single violation is enough to have military aid revoked from the violating unit, as per the Leahy Laws.

And the most reputable of human rights organizations have reported Israel’s violations extensively.

However, aid packages to Israel have only increased annually, with the help of Joe Biden.

Yet, only a single publicly known investigation has ever taking place against Israel in 2006. Even though, the very author of the law, Senator Leahy, requested that the State Department investigate Israeli human rights violations in 2016.

The bill employs the Leahy Laws to argue for an inclusion of the issue of Palestinian youth forced to stand before Israel military courts into the legislation, and therefore revoke aid from Israeli military and police units which conduct these practices.

In August of this year, Representative McCollum has similarly released H.R. 8050: Israeli Annexation Non-Recognition Act, which vows to revoke aid from Israel that could be used to directly or indirectly assist the annexation of Palestinian land in the West Bank.

This legislation has garnered more and more support from representatives around the country, including Alexandria Ocasio Cortez (NY-14), Rashida Tlaib (MI-13) and Ilhan Omar (MN-05), reserving a space for Palestine in American politics. Yet unfortunately, the conversation amongst electoral candidates remains uninformed, trivial and dangerous.

Regardless of who prevails in November, both candidates undoubtedly have an “unshakeable” commitment to the apartheid regime that is Israel, and must be held to US law at the very least.

This is not about electability, but complicity in crimes against humanity, and American voters have every right to raise their standards.