Israel will not change if Benjamin Netanyahu is removed as prime minister. There is no light around the corner.

By the end of the day when you judge the real policy, not the rhetorics, yes Labor and the left are having much more sympathetic rhetorics… Shimon Peres… didn’t stop talking about putting an end to the occupation… He didn’t stop talking about it’s not democratic and it’s not justice that one people governs another people, beautiful beautiful ideas that Benjamin Netanyahu and those rightwingers would have never said.

But Nobel prize winner Shimon Peres is the founding father of the settlements project. So what do we get out of this nice rhetorics except showing a nice face of Israel and doing the very very very same crimes.

When it comes to the basic, Israel is really united…

Occupation is off the table in Israel. Nobody talks about it, nobody discusses it, nobody is concerned about the occupation…  It’s like the rain, like the sun.. Some like it, some like it less.

But nobody thinks that anything can be done about it. It doesn’t bother us so much, that’s the truth.

It’s only a half hour from our homes, but who hears about it and who cares about it. And the crimes are on a daily basis.

The Israeli media are in the tank on Israeli propaganda about the Tamimi family.

The media hardly covers them, and if they cover them, it will always be according to the Zionist narrative.

A terrorist of 12. A girl of 14 with scissors in her hands as an existential threat to the state of Israel.

A girl who is slapping a soldier as someone who deserves life sentence. Not less than this! A girl that one hour before her cousin was shot in the head 50 meters from her home.

So now the Israeli army claims that this was fabricated. I mean, even the Israeli propaganda lost its shame.

The Israeli claims about the Tamimi family show that the propaganda has never been so desperate:

When Israel dares, dares to claims that this child Mohammed Tamimi whom I met a few days after he was injured, he lost half of his brain, that he fabricated his injury, then you see that Israel is really desperate. 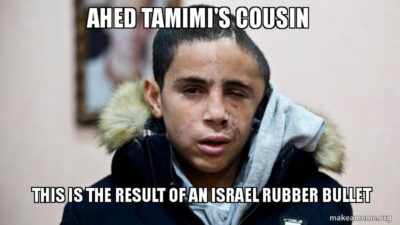 If Israel needs this kind of level of propaganda, if Israel is getting so low, in denying shooting in the head of a child of 15– and claiming that he falls from his bicycle– then you know that things are getting worse. Maybe it’s a  hope for a new beginning, but right now look how low does it get there.

It’s totalitarian– no society lives in as much denial as Israel.

And all those are passing Israeli society as if nothing is happening. No question marks.

Very little moral doubts if at all. A coverup. Living in denial like never before. I cannot think about one society that lives in such denial like the Israeli society, and again it includes left and right.

Except of the very devoted extreme left, activists, let’s remember them.

But they are really small figures and totally totally delegitimized…. The occupation must go on, Ahed Tamimi must stay in jail forever, and the crimes must continue because we have no other choice.

There are three core values of Israeli culture that enforce the totalitarian discourse.

There is a third very deep rooted value. This is the very deep belief again everyone will deny it but if you scratch under the skin of almost any Israeli you will find it there, the Palestinians are not equal human beings like us.

And maybe that’s the key issue. As long as this continues, nothing will move.

We are so much better than them, so much more developed than them, more human than them.

All our dreams will never become true so long as this core conviction will not change.

Breaking the Silence should have been an “earthquake” in Israeli society. But it was crushed.

Anyone who raises a question is immediately erased, demolished. Look at the Jewish lobby so called in Israel, and Breaking the Silence.

For years we were dreaming of the day that  soldiers would stand up and tell the truth. Not Gideon Levy the liar the traitor… no, soldiers who have committed those crimes will just come and testify about what they had been doing.

And here it came. Over 1000 testimonies, of soldiers who in a very brave way gave their testimonies about what they have been doing in the occupied territories thoughout the years.

This should have been an earthquake in any healthy society. It’s our sons. But what happened? Nothing. Breaking the Silence was immediately delegitimized by the establishment with the typical collaboration of the Israeli media.

I’m afraid to say that Breaking the Silence is crushed today. And this was just one example.

Israeli society has a very clear intention to crush any type of criticism, from within or outside.

The occupation is not temporary.

It was never meant to be temporary… There was never a statesman in an influential position, prime minister or so, who really meant to put an end to the occupation. None of them.

Some others wanted to be perceived by the world, to be hugged by the world, as people of peace. But none of them had the intention to put an end to the occupation. How do I know it? Israel has never stopped building settlements.

And anyone who builds one house in the occupied territories has no intention whatsoever to put an end to the occupation.

Israelis have it too good to even think about occupation. And the brainwashing is too deep for the facts to get through.

They know nothing. Anyone in this hall knows so much more about the occupation than any average Israeli, including those who served there in the army…

So to expect a change from within this society, when restaurants are packed, when life is beautiful, when there is hardly terror in Israel…

The only violent attacks are mainly now in the occupied territories… Tel Aviv is living a very, very peaceful secure life. To expect this society to stand up and say, No more– out of what? What incentive? The hopes for change from within Israeli society are really very, very minimal…. People like me, my only hope is from people like you.

Trump’s move of the embassy to Jerusalem is good news in the end, for it removes any illusions about the U.S. role.

For the long run I see it as an achievement, end of the masquerade, end of the lip services. And I’m very grateful, you’ll be surprised, to Donald Trump, who brought us there.

Activists should fight the Zionist project on three fronts. First, stand up for Boycott, Divestment and Sanctions (BDS) against efforts to criminalize it.

One must be is to fight this unbelievable process of criminalization of criticizing Israel. T

his must stop and we shouldn’t give up… When they call you anti-Semites– they get paralyzed. If you call someone an anti-Semite in Europe he is paralyzed, and they take advantage of it in a very manipulative way. Don’t let them!

You should be proud in raising your voice. BDS right now is the only game in town. BDS is a legitimate tool. Israel is using it, by calling the world to boycott Hamas, to boycott Iran. You have the full right not to buy products from sweat shops in South Asia…. What does it mean that you should apologize for boycotting something that deserves boycott?

We have one  proof why BDS is the right thing to do. Look how Israel gets nervous about BDS, and if they get so nervous about it you can know that is the right way… Those sentences very soon will become a violation of Israeli law. You are not allowed to call people to boycott Israel, but let’s challenge them.

The second challenge is to try and tear especially in this country the lie that Israel is the only democracy in the Middle East. We need it desperately… It’s all about telling people the truth. A state that possesses one of the most brutal tyrannies on earth cannot be called a democracy, period.

The last lie I suggest to you to fight is the lie that all this is temporary…. ’48 never stopped. Let’s remember it. It’s the same policy, those are the same methods. Same brainwash, some explanations and excuses. As long as this continues, no one can claim that this is temporary. The occupation is there to stay.

The two state solution is over, and we must struggle for equal rights, between river and sea.

The very dramatic fact, today between the Jordan River and the Mediterranean, there are exactly 50/50: Six million Palestinians and six million Jews… It is roughly half and half, two peoples equal right now. If someone thinks that one people can dominate another people, and let’s get back to Zionism… the basic of Zionism is that there is one people which is privileged over the other. That is the core. This cannot go on. And if it goes on, it has only one name… apartheid.

We shouldn’t give up… I truly believe that Palestinians and Israelis, Palestinian Jews, can live together. We tried it in the past. It is being tried today in all kinds of small frameworks. We can really live together, believe me, I’d rather have a Palestinian prime minister than Yair Lapid or Benjamin Netanyahu.

In the question period, Levy said that the occupation would not last even for a few months without American support. And that Israel would change if it is truly isolated by Europe, so that Israelis face travel restrictions. Yes, outside pressure will at first unite Israel, but that will soon change.

I can assure you after the first rhetorics of, we are all united against the world, they hate us, then rationality will come into the picture.