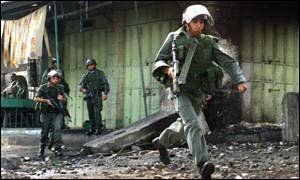 Israeli soldiers enforce a curfew, keeping all Palestinian residents in their homes. Israeli settlers, who have taken over part of the city, are not affected by the curfew. Countless Palestinians have been injured or killed when they – sometimes unknowingly – violated curfew.BBC

If this doesn’t wake people up to what exactly what Israel is nothing will.

This is my drive into Ramallah. See where the wall opens?  And that’s where it closes. Anytime the occupiers say so, the Palestinians are just locked in. This is the same force that is now running USA for Israel. 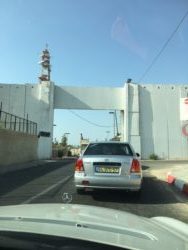 The West Bank closure system is a series of obstacles including permanent and partially manned checkpoints, concrete roadblocks and barriers, metal gates, earth mounds, tunnels, trenches, and an elaborate set of permit restrictions that controls and restricts Palestinian freedom of movement.

As Israeli citizens head to the polls to vote on Tuesday, the Israeli terrorist army will put Palestinians in the West Bank under complete closure and will seal the Gaza Strip entirely.

This means that as Israeli citizens living in settlements across the occupied territories may move freely back and forth across the Green Line separating Israel and the West Bank, millions of Palestinians are barred from doing so.

Even those tens of thousands of Palestinians who have permits to work inside Israel every day — primarily in construction and maintenance jobs — will not be allowed to go to work that day.

Unlike Israelis, for whom Election Day is a paid holiday, they will not be compensated for the one-day leave imposed on them by the Israeli military.

Palestinians in the Gaza Strip, for whom leaving requires months-long processes of applying and waiting for an Israeli military permit, which is often denied, will be entirely stuck. 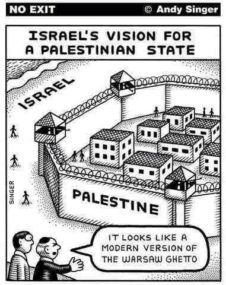 The closure is scheduled to begin at midnight Monday, April 8, and end at midnight on April 9. The army says it will make humanitarian and medical exceptions on a case-by-case basis out of humanitarian basis.

Palestinians living in the West Bank and most in East Jerusalem — 2,953,000 in total — are not eligible to participate in Israel’s democratic system.

That same system, which others get to vote in, rules nearly every aspect of their lives, decides where they can or cannot travel, where they can live, whether they can hold political protests, where they may or may not build, and in some cases even what they can and cannot say.

The nearly half a million Israeli settlers who live in the West Bank are not only subject to a different set of laws, they have the right to vote in elections that can change those policies if they have grievances.

In the Gaza Strip, the Israeli army decides what goods may be imported and exported, where fishermen can fish, how much electricity is available on a daily basis, who can enter and exit the territory, and who can travel between different areas of the occupied Palestinian territories. None of the 1,961,000 people living there have a say in those policies.

While Palestinians in the West Bank are barred the right to vote and the ability to travel freely, the soldiers tasked with carrying out the day to day of military occupation were given the privilege of kicking off the 2019 elections.

In the run-up to the elections, the IDF established 130 makeshift polling stations for soldiers on duty. At Ofer Military Base, which houses an infamous military court and prison, Israeli soldiers took part in the early voting process, allowing them to enjoy the fruits of the democratic process.

One thought on “The “Only Democracy In The M.E.” Has Sealed The Palestinians In Their Ghettos As “Israelis” Go To The polls”