The system was tested in Vietnam thirty years ago, and perfected in Israel on the Palestinians, and is ready for application here and now.

During the Vietnam War, under the CIA’s Phoenix Program –which is the model for the Homeland Security Office — a terrorist suspect was anyone accused by one anonymous source. Just one.

The suspect was then arrested, indefinitely detained in a CIA interrogation center, and tortured until he or she (or in some cases children as young as twelve) confessed, informed on others, died, or was brought before a military tribunal (such as Bush is proposing) for disposition.

In thousands of cases, innocent people were imprisoned and tortured based on the word of an anonymous informer who had a personal grudge, or was actually a Viet Cong double agent feeding the names of loyal citizens into the Phoenix blacklist.

At no point in the process did suspects have access to due process or lawyers, and thus, in 1971, four US Congresspersons stated their belief that the Phoenix Program violated that part of the Geneva Conventions guaranteeing protection to civilians in time of war. I repeat, in time of war. 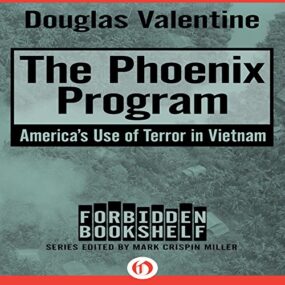 Recommended reading for all Americans and those who do not believe that it will not happen again.

But those sorts of abuses can’t happen here, during Bush’s newly declared war on terrorism, right?

All the moral prohibitions on the reactionary right wing have been lifted.

The same thing happened in the Fatherland after the First World War — and that is the real threat of anti-terrorism we’re facing in America today.

In the name of anti-terrorism, all of the nation’s pent-up anger and frustration over Vietnam, and a host of other “cultural” issues, is poised to be unleashed on the Enemy Within.

And the Bush Administration and its propagandists have already defined the Enemy Within in very clear terms: “We’re all Israelis now,” they say, adding that, “You’re with us or you’re against us,” in the declared war against terrorism.

And being “against us” is a dangerous proposition. As noted, Bush is considerating the formation of Phoenix-style military tribunals that operate beyond due process of law.

The system was tested in Vietnam thirty years ago, and perfected in Israel on the Palestinians, and is ready for application here and now.

The New Psywar As stated twelve years ago in the October 1989, Marine Corps Gazette (p 22-26a), Bush’s New War will be “widely dispersed and largely undefined; the distinction between war and peace will be blurred to the vanishing point.”

There will be no “definable battlefields or fronts,” and the distinction between “civilian” and “military” will disappear.

“Success will depend heavily on effectiveness in joint operations (such as Bush proposes between Ridge at Homeland Security and Downing at the Pentagon) as lines between responsibility and mission become very blurred.” 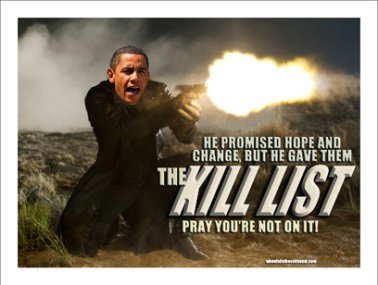 According to the Gazette article, success in the New War against undefined suspects will also depend on “psychological operations” manifest “in the form of media/information intervention.”

One must be “adept at manipulating the media to alter domestic and world opinion….”

On the psywar battlefield, “Television news may become a more powerful operational weapon than armored divisions.”

The TV “hawks” love to blame the anti-war movement for Americas defeat in Vietnam, and they assert in these do-or-die times that dissent promotes terrorism.

In terms of the psywar strategy outlined above, this is exactly how nationalists and even pacifists became equated with terrorists in Vietnam, and thus subject to indefinite detention and torture in an interrogation center, and — in the case of some 40,000 plus individuals — assassination under the CIA’s Phoenix Program.

The Bush Administration claims that a war against terrorism requires different justice.

The strategy is working in Israel, but in Vietnam it turned an entire population against its government and engendered a tragedy of epic proportions.

One can only wonder how Americans will react if due process is abandoned through the Office of Homeland Security, under the direction of the Pentagon. CP

Douglas Valentine writes frequently for CounterPunch. He is the author of The Phoenix Program, the only comprehensive account of the CIA’s torture and assassination operation in Vietnam, as well as TDY a chilling novel about the CIA and the drug trade.

2 min video clip Israel is an imperial outpost, an extension of Wall Street and the City of London in the Middle East. That's the origin of "Israel."
LAGenie @lagenie24
2 hours ago
One or both of those still on the run after the #GilboaPrison break could now be holed up in #Jenin, Zionist terrorist in charge said, prompting “the possibility of launching a large-scale terrorist operation” there. #Palestine #Israel https://t.co/RnR4XJziuc
View on Twitter

0
0
LAGenie @lagenie24
3 hours ago
Israel considers all Palestinians who aren't GONE enemies and terrorists. Enemies because Palestinians owns the land "Israel" sits on. Israeli leaders don't want to confuse ppl as to who is the real terrorist. #occupiedpalestine https://t.co/7p1hdAmH4Q
View on Twitter

0
0
LAGenie Retweeted · Team Palestina @TeamPalestina
3 hours ago
Tomorrow! #Derry #IPSC will have an information stall at the University of #Ulster Magee campus for freshers' week on Monday 20th September from 9.30 to 3pm. Find out about the work of the @IPSC and about #Palestine 🇵🇸 https://t.co/FlYYZo6vAM
View on Twitter

2
0
LAGenie Retweeted · Oldham Peace and Justice @OLDpeacejustice
3 hours ago
Israel continues to bomb the Gaza Strip on a regular basis.