“Unfortunately there is too much truth in the charge made by the Slavs that the reasons for this is that the American press is so largely owned and controlled by the Jews.” 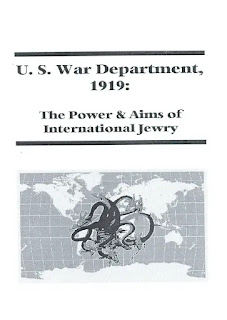 I can only copy a selected portion, the image is linked.

The report is a U.S. War Department investigation and evaluation of issues generated by Jewish power. It was compiled in August 1919 and given SECRET classification until 1973. A hard copy of this document may be obtained from U.S.
National Archives in Washington DC, – its number is 245-1. This is PART 1, of serial parts as transcribed by PAPUREC.

The recent emphasis in American public opinion placed on the part the Jews have  been taking in world events, has seemed to warrant the Department in undertaking a  preliminary study of the particular matters in controversy and also the larger question of the scope of Jewish influence in world affairs today.

Among the more important  points around which controversy has waged are:
I. The authenticity of the so-called Jewish Protocols, which purport to set forth a Jewish plan, centuries old, of world domination.

II. The question of how far Jewry as such is connected with Bolshevism, not only in the Soviet Government of Russia and Hungary, but in all the other countries of the world and particularly Germany and the United States.

III. The various phases of the Polish question:(a) Whether the Jewish anti-Polish propaganda in the United States has been based on actual widespread Jewish Pogroms in Poland, or (b) Whether, on the contrary, the stories of pogroms have been greatly exaggerated as a part of a deliberate Zionist propaganda to get for the Jews in Poland minority rights which both factions of American Poles publicly denounce as amounting to the creation of a state within a state.

(c) How serious is the nation-wide secret boycott against all Jews and Jewish goods recently started by the American Poles and other Slavic sympathizers ?[page 2 of doc. begins]It is self evident that in controversies such as these the Jews are strongly on the defensive on one side while the Slavic peoples are bitter in their denunciation upon the other.

the protocols are exactly what they say they are: an outline of jewish tribal plans for world domination, overflowing with racist contempt for non-jews.

The important thing for us, however, is the fact that Americans in the main do not sense the situation nor appreciate its dangerous possibilities. Unfortunately there is too much truth in the charge made by the Slavs that the reasons for this is that the American press is so largely owned and controlled by the Jews.

Witness the fact that the so-called Jewish Protocols which constitute by far the most serious charge against the Jews of those above enumerated, have never been mentioned in any American publication other than the official report of the Senate Judiciary Committee containing the testimony about the Protocols.

Mr. Simons: There is a gentleman here in America who last night called on me, Dr. Harris A. Houghton, I think is his full name. I knew him out in Bay Side when I was the pastor of that church.
He called on me last night. He is a Captain in the United States Army. I had not seen him for six years.

He asked me whether I knew anything about the anti-Christian element in the Bolshevik regime. I said, “Indeed I do”. I do know all about it.”

He said, “Did you ever come across the so-called Jewish protocols ?” I said “Yes, I have had them.” “I have a memorandum” he said, “and last winter after much trouble I came into possession of a book which was called “REDUSTI, ANTI-CHRIST.”

Now, Dr. Houghton in the meantime had investigated this. He had come into possession of this book, which is quite rare now, because it was said that when the edition came out it was immediately bought up by the Jews in Petrograd and Moscow.

That book reflects a real organization. That book is of some consequence. But the average person in official life here in Washington and elsewhere is afraid to handle it.

Houghton says that even in his intelligence bureau they were afraid of it.Senator King: Tell us about the book.

What is bad about it ? Is it anti-Christian ?Mr. Simons: It is anti-Christian and it shows what this secret Jewish society has been doing in order to make a conquest of the world, and to make the Christian forces as ineffective as possible, and finally to have the whole world, if you please, in their grip.

A number of similar illustrations such as the quotations relating to the “Terrible  power of the Jewish purse” are set out in Appendix A.[page 6 of doc. begins]Some of the important events which have occurred since 1897 have fulfilled in a striking manner the predictions and aims expressed in the Protocols themselves.