Just when I thought it couldn’t get worse… 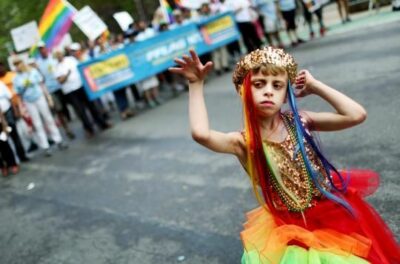 Desmond dancing at a gay pride parade at age 8.

Titled, “Sashaying Their Way Through Youth,” the outlet’s Alice Hines wrote that the young children are the newest “rising drag stars of America.”

The feature showcased Desmond Napoles, a 12-year-old “drag kid” who has performed countless shows and has the support of his parents. Napoles has previously insisted that he is gay.

Hines wrote, “Desmond and his mother would still make it to the object of Desmond’s excitement: DragCon, the convention hosted by RuPaul in New York City in early September. It would be Desmond’s third year in a row. He isn’t a different person in drag so much as a more outgoing version of himself, he said. ‘I’m always fierce, fabulous and not playing video games,’ he said. ‘I’m being AH-MA-zing.'”

Desmond’s mother, Wendy Napoles, adds that she sees herself as a typical mother.

“Other moms are a soccer moms,” she told the outlet. “They take their kids to practice, to games, they cheer for their kids. That’s how I see myself with drag.”

Desmond Napoles (aka Desmond is Amazing) is an 11-year-old drag performer who rose to fame due to his appearances on national television, fashion magazines and LGBTQ-related events. He became an instant media darling when a video of him dancing at a gay pride parade became viral.

Laura Edwards-Leeper, a clinical psychologist in Oregon who works with queer and trans kids, said that experimenting with gender expression isn’t necessarily linked to being queer or trans. “It’s normal at basically any age for boys to dress up as princesses and girls in male superhero outfits,” she said.

What’s changed is parenting. “When there’s no judgment, kids are more likely to feel free to explore,” Dr. Edwards-Leeper said.

“We had a kid who was a drag queen one year and a drag king the next,” Robin Johnson said. “We have had four hyperqueens, or girls doing drag.”