Trump’s plan recommends land swap that would strip some 260,000 Palestinians in Israel of their citizenship and “place them under perpetual … military occupation”   Zionist heathens have stolen the holyland from the Jews, Christians and Muslims. 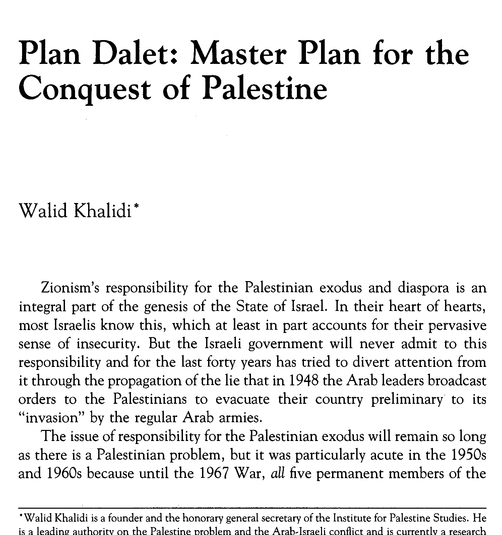 After 70 years of pissing on the Palestinians America and Israel suddenly want to “improve” their lives. But when you look closer at the so-called “Peace to Prosperity” [Trump’s “deal of the century”] it’s all about thieving more Palestinian land, stripping these good people of what remains of their self-respect and grinding them further into the Holy Land dust.

The Zionist terror plan to steal the land of Palestine

It’s plain to see that Trump’s “peace” proposal is actually the climactic fulfillment of the long-running and thoroughly nasty Plan Dalet (otherwise known as Plan D). This was the Zionists’ blueprint, in anticipation of the British leaving, for the violent and murderous takeover of the Palestinian homeland as a prelude to declaring Israeli statehood – which they did in May 1948. It was drawn up by the Jewish underground militia, the Haganah, at the behest of David Ben-Gurion, then boss of the Jewish Agency.

Plan D’s intention was not only to gain control of the areas of the Jewish state and defend its borders but also to control the areas of Jewish settlements and concentrations located outside Jewish borders and ensure “freedom of military and economic activity” by occupying important high-ground positions on a number of transport routes.

“Outside the borders of the state” may seem a curious thing to say when nobody knew where Israel’s borders actually ran, except where marked on the 1947 UN Partition Plan map. Israel has purposely kept its borders fluid in order to accommodate the Zionists’ perpetual lust for expansion.

Success would depend on, among other things,

applying economic pressure on the enemy by besieging some of his cities”, on “encirclement of enemy cities” and on “blocking the main enemy transportation routes… Roads, bridges, main passes, important crossroads, paths, etc. must be blocked by means of: acts of sabotage, explosions, series of barricades, minefields, as well as by controlling the elevations near roads and taking up positions there.

In other words, a reign of terror.

Palestinians in Gaza are “living” an illegal, crippling israeli siege that’s purposely shattering all spheres of life — a prelude to genocide #BDS https://t.co/Odh6LgC7Fq

Jewish forces would occupy the police stations, described as “fortresses”, 50 of which had been built by the British throughout Palestine after the Arab unrest of 1936-39.

Plan D discussed “operations against enemy population centres located inside or near our defensive system in order to prevent them from being used as bases by an active armed force”. These operations included:

Villages emptied in this way were then fortified.

If they met no resistance “garrison troops will enter the village and take up positions in it or in locations which enable complete tactical control”, said Plan D. “The officer in command of the unit will confiscate all weapons, wireless devices, and motor vehicles in the village. In addition, he will detain all politically suspect individuals… In every region, a [Jewish] person will be appointed to be responsible for arranging the political and administrative affairs of all [Arab] villages and population centers which are occupied within that region.”

Thirty four massacres are said to have been committed in pursuit of Plan D’s racist and territorial objectives. The massacre at Deir Yassin by Jewish terror groups set the tone in order to “soften up” the Arabs for expulsion. More atrocities followed the declaration of Israeli statehood on 14 May 1948. Some 750,000 Palestinians were put to flight as Israel’s forces obliterated hundreds of Arab villages and towns. The village on which Sderot now stands was one such. To this day the inhabitants have been denied the right to return and received no compensation.

And here are the chilling guidelines for besieging, occupying and controlling Arab cities:

1. By isolating them from transportation arteries by laying mines, blowing up bridges, and a system of fixed ambushes.
2. If necessary, by occupying high points which overlook transportation arteries leading to enemy cities, and the fortification of our units in these positions.
3. By disrupting vital services, such as electricity, water and fuel, or by using economic resources available to us, or by sabotage.
4. By launching a naval operation against the cities that can receive supplies by sea, in order to destroy the vessels carrying the provisions, as well as by carrying out acts of sabotage against harbour facilities.

Plan Dalet is one of the sickest documents in history and shows why so many people question Israel’s legitimacy. 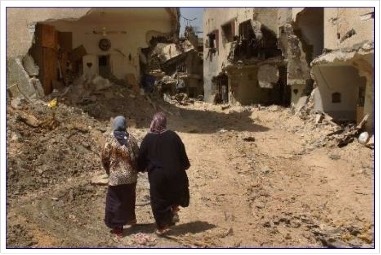 Destruction of Jenin refugee camp. In the early hours of 3 April 2002, Israeli forces invaded Jenin and the refugee camp adjacent to it, declared them a closed military area, prevented all access, and imposed a round-the-clock curfew. … On April 25, 2002, Charity Crouse visited Jenin refugee camp.Apr 24, 2002

Atrocities occurred at Deir Yassin, Lod (Lydda) and Ramle. The Deir Yassin massacre was carried out by the two Zionist terror groups, the Irgun and the Stern Gang. On an April morning in 1948 (before the Israeli state declaration) 130 of their commandos made a dawn raid on this small Arab town with a population of 750, to the west of Jerusalem.

The attack was initially beaten off, and only when a crack unit of the Haganah arrived with mortars were the Arab townsmen overwhelmed. The Irgun and the Stern Gang, smarting from the humiliation of having to summon help, embarked on a “clean-up” in which they systematically murdered and executed at least 100 residents – mostly women, children and old people. The Irgun afterwards exaggerated the number, quoting 254, to frighten other Arab towns and villages.

The Haganah played down their part in the raid and afterwards said the massacre “disgraced the cause of Jewish fighters and dishonoured Jewish arms and the Jewish flag”.

Deir Yassin signalled the beginning of a deliberate programme by Israel to depopulate Arab towns and villages – destroying churches and mosques – in order to make room for incoming holocaust survivors and other Jews. 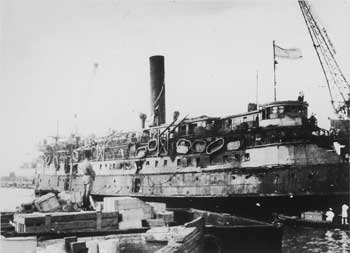 First the Zionist holocaust, next rescue them and bring them to Palestine.

In July 1948 Israeli terrorist troops seized Lydda, shot up the town and drove out the population. Donald Neff reported how, as part of the ethnic cleansing, the Israelis massacred 426 men, women and children. A total of 176 of them were slaughtered in the town’s main mosque.

The remainder were forced to walk into exile in the scalding July heat, leaving a trail of bodies – men, women and children – along the way. Of all the blood-baths they say this was the biggest. The great hero Moshe Dayan was responsible. Was he ever brought to book? Of course not. Lydda airport is now Ben Gurion airport.

The Israeli state’s greedy ambition overran the generous borders gifted to the Zionists in the UN Partition Plan, and by 1949 the Zionists had seized nearly 80 per cent of Palestine, provoking the resistance backlash that still goes on today.

Israel’s numerous war crimes and crimes against humanity, and its continual defiance of international law and the UN Charter, undermine the Jewish state’s claim to legitimacy as far as Arabs and many non-Arabs around the world are concerned.

UN Resolution 194 called on Israel to let the Palestinians back onto their land. It has been re-passed many times, but Israel still ignores it. And so does the Trump plan.

The Israelis also stand accused of violating Article 42 of the Geneva Convention by moving settlers into the Palestinian territories it occupies, and of riding roughshod over international law with their occupation of the Gaza Strip and West Bank.

But as Plan D shows, “expulsion and transfer” (i.e. ethnic cleansing) were always a key part of the Zionists’ scheme. According to historian Benny Morris, no mainstream Zionist leader could conceive of future co-existence without a clear physical separation between the two peoples.

Ben-Gurion, who became Israel’s first prime minister, is reported to have said in 1937: “New settlement will not be possible without transferring the Arab fellahin…” The following year he declared: “With compulsory transfer we have a vast area [for settlement]… I support compulsory transfer. I don’t see anything immoral in it.”

On another occasion he remarked:

If I were an Arab leader I would never make terms with Israel. We have taken their country. Sure, God promised it to us, but what does that matter to them? Our God is not theirs. We come from Israel, it is true, but 2,000 years ago, and what is that to them?

There has been anti-Semitism, the Nazis, Hitler, Auschwitz, but was that their fault? They only see one thing: we have come here and stolen their country.

Ben-Gurion reminded his military commanders that the prime aim of Plan D was the ethnic cleansing of Palestine. He was well aware of his own criminality.
Today under the Trump plan, as the Guardian points out, a Palestinian state would receive territory, mostly desert, near Gaza to compensate for the further loss of about 30 per cent of the West Bank. And we are all asked to recognize the Jordan valley, which makes up about a third of the occupied West Bank, and the Old City of Jerusalem, as part of Israel.

LAGenie Retweeted · Consent Factory @consent_factory
14 hours ago
In the new (pathologized) totalitarian future, your children won't have to be ordered to wear masks, because they will be conditioned to be paranoid from the day they are born. https://t.co/hZhIqohgCA
View on Twitter

30
0
LAGenie Retweeted · True Torah Jews @TorahJews
14 hours ago
Its no news that Jews & Muslims lived in harmony for 100s of years. Not only were we not enemies, but came together as friends

96
0
LAGenie Retweeted · Ariel Gold אריאל #JewsForBlackLives ☮️ @ArielElyseGold
20 hours ago
The world tells the US where to shove our provocations for war with Iran. https://t.co/FkZSWifdeT
View on Twitter
48
0
LAGenie @lagenie24
2 days ago
I stand in solidarity with Palestinian refugees, who are still awaiting a just solution to attain their inalienable rights, including their right to return as defined by #UNResolution194. Over 71 years on, it’s time to #EndNakba https://t.co/SIQmGidWMi
View on Twitter
0
0
LAGenie Retweeted · Farah Nabulsi @farah_nabulsi
2 days ago
This is Jericho, Palestine. The oldest continuously inhabited city in the world, in the Jordan Valley. It will be annexed on July 1st by Israeli occupation forces, locking over 20,000 Palestinian residents & impeding access to neighbouring Palestinian cities - suffocating them. https://t.co/rd99m80Gic
View on Twitter