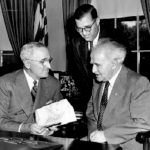 “And if you don’t come out for a Jewish state we’ll run you out of town.”

When Israel declared statehood on 14 May 1948, the UN General Assembly was in session discussing a U.S. proposal for trusteeship for Palestine. While still in session, U.S. president Harry Truman immediately recognized the new “provisional government” as the de facto authority of the State of Israel and, as was later revealed, did so without informing the U.S. State Department. Six months later, Israel sought admission to the UN, and though a few countries challenged the legality of its admission, in May 1949 it was admitted as a member state, despite its violations of international law.

November 28, 1947 on the eve of the UN “vote” and titled “The Consequences of the Partition of Palestine” (Now Declassified document):   The good will enjoyed by the US at the time of the Roosevelt-Ibn Saud Conference and following backing of Lebanese and Syrian claims for independence was short lived as a result of President Truman’s support of Jewish immigration to Palestine and of the Anglo-American Committee report. Because of the long standing cultural ties between the US and the Arab world, the friendly role that the US played in the achievement of Syrian and Lebanese independence, the partial dependence of certain Arab states on oil royalties from US companies, and the promise of increased royalties in the future, the Arab states would like to maintain friendly relations with the US. … Little of this (positive) development will be possible, if the US supports a Jewish state in Palestine.”

The Statehood of Palestine: International Law in the Middle East Conflict, by John Quigley

The book is the most recent in a relatively new line of academic research on Palestine that aims to use the framework of law, and in particular international law, to highlight the injustices perpetrated against Palestinians by Zionist and other imperialist forces. Quigley is not a newcomer to this field, and his past titles include The Case for Palestine: An International Law Perspective (Duke, 2005) and Palestine and Israel: A Challenge to Justice (Duke, 1990).

Divided into four parts and spanning twenty chapters, Quigley begins by tracing the Palestinian Arab quest for independence and the impact of the British Mandate system on Palestine. In the first two parts, the author methodically points out that like other Class A Mandates, “Palestine had relations with other states that required the conclusion of treaties. Palestine’s citizens had connections with other states and required for that purpose a nationality.

Palestine’s status came up as an issue in a variety of ways during the time of Britain’s administration. In all of these interactions, the states of the international community dealt with Palestine as a state” (pp. 52–3). But unlike other Class A Mandates, Palestine did not gain its independence; rather, it soon fell subject to endless proposals and plans—including for trusteeship—to accommodate a Jewish minority and its nationalist aspirations at the expense of the rights of Palestinian Arab majority.

Indeed, when Israel declared statehood on 14 May 1948, the UN General Assembly was in session discussing a U.S. proposal for trusteeship for Palestine. While still in session, U.S. president Harry Truman immediately recognized the new “provisional government” as the de facto authority of the State of Israel and, as was later revealed, did so without informing the U.S. State Department. Six months later, Israel sought admission to the UN, and though a few countries challenged the legality of its admission, in May 1949 it was admitted as a member state, despite its violations of international law.

Palestine was now divided into three pieces, with Israel in control of 78 percent of the land of historic Palestine, but according to Quigley, the statehood of Palestine was not extinguished: “Governmental control had been lost, but not statehood. . . . The fact that Palestine had no national administration exercising powers in its territory did not signify its extinction as a state” (p.125).

Part four of the book serves as the most illuminating for those interested in the current politics surrounding the proposed declaration of statehood and admission to the UN. Quigley argues that Palestine today—defined as the West Bank, including East Jerusalem, and the Gaza Strip—meets all of the necessary criteria to be recognized as a state: a defined population, a defined territory, the capacity to enter into international relations, and government control. Quigley provides examples of states that fall short of fulfilling international criteria to a greater extent than Palestine.

For example, Ukraine and Belarus were constrained in their control over their foreign relations and domestic policy and yet were recognized as states. Bosnia was similarly restricted when it was accepted as a state in 1995, while other deemed “failed states”—such as Somalia and the Democratic Republic of the Congo—are still recognized as states. Quigley concludes by stating: “The view that Palestine is not a state suffers from four errors. It disregards historical facts that show Palestine statehood dating from the Mandate period. It applies criteria for Palestine statehood that are more stringent than those actually followed in the international community. It fails to account for the fact that Palestine’s territory is under belligerent occupation. It fails to account for facts showing the implied recognition of Palestine” (p. 252).

For students of international law and those interested in more closely examining the issue of statehood in general and Palestine’s statehood in particular, this persuasively written book serves as a useful resource filled with thoroughly researched examples.
But while the book is thorough, it is not without its flaws. A main flaw is the cursory manner with which Quigley addresses the implications of statehood and how statehood—if proclaimed—will or will not halt Israel’s ongoing policies of expulsion and dispossession. In other words, the author fails to answer the basic questions of what will be gained and what may be lost by a declaration of statehood, particularly given Israel’s refusal to submit to international jurisdiction and treaties. In that sense, it is a technical legal argument and does not address the reality within which Palestinians live.

While law is an important tool (as the Truman example demonstrates) international law is not devoid of international power and politics, with legal rules created to suit the particular political circumstances. Second, the book fails to provide any analysis of the impact of statehood on Palestinian refugees and on the representation of Palestinian refugees by the PLO before the UN. Finally, the book is narrowly focused on the issue of statehood but fails to recognize that the Palestinian cause is not merely one of territory, but one of challenging Israel’s colonial and imperial policies, including, but not limited to, Israel’s dispossession and denial of freedom to Palestinians. Focusing on statehood misses the forest for the trees.
————————
DIANA BUTTU is a lawyer and a fellow at the Belfer Center for Science and International Affairs at the Harvard Kennedy School of Government.

LAGenie Retweeted · Going Underground on RT @Underground_RT
7 hours ago
The US has bombed/invaded:

among many others. Maybe we need a UN arms embargo on the United States instead? https://t.co/kIhaMZhIj9
View on Twitter
49
0
LAGenie Retweeted · +972 Magazine @972mag
7 hours ago
“Keep your hands on the steering wheel. Don’t make sudden eye contact with the soldiers in front of you. Turn down your music.”

https://t.co/4TWcDYVVTB
View on Twitter
6
0
LAGenie @lagenie24
7 hours ago
Residents of Jerusalem reported that the occupation force on Tuesday night abruptly closed Qalandiya and Container checkpoints, north and south of Jerusalem City, and blocked the movement of Palestinian citizens for hours.
https://t.co/pKUAyed1oM
View on Twitter
0
0
LAGenie Retweeted · Consent Factory @consent_factory
1 day ago
In the new (pathologized) totalitarian future, your children won't have to be ordered to wear masks, because they will be conditioned to be paranoid from the day they are born. https://t.co/hZhIqohgCA
View on Twitter