Fight hard and be strong in the battle against the Zionists and the Nationalist Council, which has risen up against us and against the holy Torah. We must especially fight their latest sins, in which they take precious souls, refugee children from Poland or Yemen, orphaned of both father and mother, and force them to abandon their faith. Wage a bold war with them, and G-d forbid to come to an agreement with them. (Hachomah, 1 Sivan 5704) Rabbi Dovid Baharan of Jerusalem,(d. 1946) 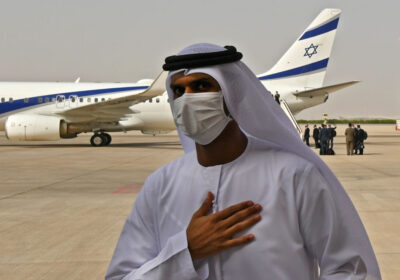 “It is time for this region to enjoy peace, stability and development,” Al Kaabi remarked.

A Congressional aide told Reuters on Friday that the State Department informally notified Congress of its intent to sell $10 billion in military equipment to the UAE. The $10 billion sale includes precision-guided munitions, non-precision bombs, and missiles.

The informal notification was sent to Congress late Thursday after the Trump administration did the same for a $2.9 billion drone sale to Abu Dhabi.

News of the potential drone sale and munitions sale comes shortly after the State Department told Congress of its plans to sell F-35 fighter jets to the UAE, a sale that was agreed to as part of Abu Dhabi’s normalization with Israel.

Arming the UAE to the teeth could draw concern from Congress over Israel’s military superiority in the region, known as the Qualitative Military Edge (QME). Congress is required by US law to uphold Israel’s QME, and some lawmakers have introduced legislation to slow the F-35 sale.

For their part, Israel has essentially given the US the green light to sell advanced weapons to the UAE in exchange for more arms. Israeli Prime Minister Benjamin Netanyahu said he received strong assurances on “the American commitment to preserve Israel’s military qualitative edge” when discussing the F-35 sale last week.

In earlier comments, Netanyahu said Israel would not oppose the sale of “certain weapon systems” to the UAE after discussing the issue with US officials.

The US plans to sell 50 F-35 fighter jets to Abu Dhabi, estimated at $10.4 billion. Including the drones and munitions, the UAE stands to gain about $24 billion in new weapons for normalizing with Israel.