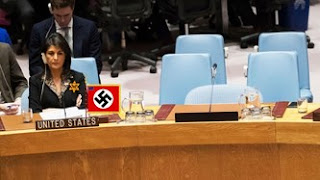 The 5th column Bitch at work for a foreign nation.

Scrapped Security Council draft urges investigation into IDF response, reaffirms ‘right to peaceful protest’
The United States on Saturday blocked a draft UN Security Council statement urging restraint and calling for an investigation of clashes on the Gaza-Israel border, diplomats said. [when one party is armed and shooting, and the other is not, can we call it a ‘clash’?]

“Council members called upon all sides to exercise restraint and prevent a further escalation,” the draft said. The proposed statement stressed the need to promote peace between Israel and the Palestinians based on a two-state solution.” [ But.. such peace plan dead in the water and officially does not exist!]

Israeli army posted a tweet accepting full responsibility and admitting that massacre in Gaza was planned, deliberate and premeditated. Then they deleted it. @btselem made a copy. https://t.co/f7nGjXLRej