“This was a defensive action designed to protect American forces and American citizens in Iraq, and it was aimed also at deterring Iran,” Pompeo told Fox News. 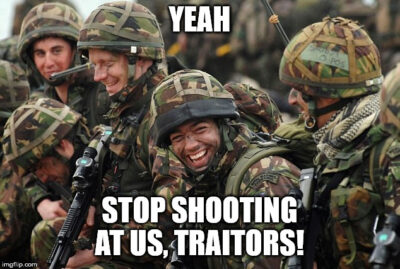 The United States is “disappointed” by Iraq’s condemnation of US air strikes against an Iran-backed Iraqi paramilitary group, a senior State Department official said, days after a rocket attack killed an American contractor.

Washington has accused Kataib Hezbollah (KH) of launching the attack on US forces before retaliating against the group on Sunday.

US air raids targeted the Tehran-linked Popular Mobilisation Units (PMU) faction KH both in Iraq and Syria after a rocket attack on an Iraqi military base in Kirkuk on Friday killed an American contractor and wounded several US service members and Iraqi personnel.

Iraq strongly denounced the US strikes on Monday, calling the raids, which killed 25 PMU fighters and wounded 55, a “violation of Iraqi sovereignty”.  Washington bombed KH positions and arms depots in Iraq and Syria.

On Monday, the US official said it was discouraging that the government in Baghdad rushed to condemn the American military response.

“We’re disappointed that every time that Kataib Hezbollah controls and moves weapons and people on behalf of the Iranians, there’s no condemnation,” the official said.

“Yeah, it’s disappointing, but – you know – it’s moments like this when you see people’s true colours.” [I’ll say! HAHAHAHA]

Iraq’s acting Prime Minister Adel Abdul Mahdi has rebuked the American strikes, saying that he had warned US Secretary of Defense Mark Esper against going ahead with them in a phone call shortly before the bombing was conducted.

“The prime minister described the American attack on the Iraqi armed forces as an unacceptable vicious assault that will have dangerous consequences,” his office said in a statement.

The mainly Shia PMU militias were formed in 2014 to fight the Islamic State group (IS) after it overran large parts of the country and threatened to capture the Iraqi capital. For the past two years, Baghdad has been trying to integrate the fighters into the Iraqi military.

The Iraqi premier’s statement painted a different picture than the one presented by the Pentagon less than 24 hours earlier.

“Secretary Esper and Prime Minister Mahdi have shared with each other their commitment to see these KH attacks … cease once and for all,” assistant to the Secretary of Defense Jonathan Hoffman said in a statement on Sunday.

Friday’s attack in Kirkuk was the latest in a series of recent rocket strikes on or near American forces in Iraq that Washington blames on Iran-backed fighters.

In a phone call between Esper and Abdul Mahdi earlier this month, the Pentagon chief called on the Iraqi government to prevent attacks against American forces.

The Iraqi prime minister’s office said at the time that Abdul Mahdi “called for serious efforts that would involve everyone to prevent escalation”.

American forces in Iraq are operating at the invitation of the government in Baghdad, with the stated goal of fighting IS.

Russia, one of the main backers of Syrian President Bashar al-Assad, also critised the strikes as being unacceptable and counterproductive.

Earlier on Monday, US Secretary Mike Pompeo stressed that Sunday’s attack was “defensive”, calling on Iran to stop its “terror campaign”.

“This was a defensive action designed to protect American forces and American citizens in Iraq, and it was aimed also at deterring Iran,” Pompeo told Fox News.

LAGenie Retweeted · Nagy Abdelsalam @24nagyelshafie
2 days ago
Never, ever, ever to name Israel as a state. Israel is a very systematic gang that follows the laws of predatory forest, supported by USA, Europe, and all Arab rulers because all of them are dictators and Zionist agents particularly M. Abbas, Sissi, M. Salman https://t.co/hMGRGaV0cc
View on Twitter
2
0
LAGenie @lagenie24
4 days ago
https://t.co/43i4t9YSaL https://t.co/RJj9xtimbZ
View on Twitter

0
0
LAGenie Retweeted · Middle East Eye @MiddleEastEye
5 days ago
On this day 60 years ago, France tested its first nuclear bomb in the south of Algeria around 30 miles south of the small town of Reggane

1191
0
LAGenie Retweeted · Burning Flowers... @willwilla1
5 days ago
@danielmarans @fshakir @BernieSanders Everyone sees the writing on the wall. Get on board or get pitchforked, ur choice...
View on Twitter
1
0
LAGenie Retweeted · Chris Floyd @empireburlesque
5 days ago
My fellow Americans: You think you live in a free country? You don't. You live in an authoritarian ethno-state that's sending armed goons to impose its will on you. And these same goons will come for you if the vote goes the "wrong" way in November. https://t.co/p9xxQuo7Qe
View on Twitter
7
0
Follow @lagenie24