A US judge has dismissed a lawsuit that aimed to link a Washington-based Palestinian rights advocacy group to “international terrorism”, in a decision that activists hailed as a victory for free speech.

In a ruling released on Monday, federal judge Richard Leon rejected a claim that the US Campaign for Palestinian Rights (USCPR) is liable for militant attacks against Israelis because of its support for the Boycott, Divestment and Sanctions (BDS) movement and Gaza’s Great March of Return.

The lawsuit was led by the Israeli government-aligned Jewish National Fund and group of US citizens living in Israel.

They argued that the USPCR aided and abetted acts of “international terrorism” by supporting the Great March of Return and the BDS National Committee (BNC).

The plaintiffs sought a jury trial demanding compensation under the Anti-Terrorism Act (ATA), a US law that allows victims of terrorism to sue accomplices in militant attacks for damages.
‘Not convincing’

Sen John Kerry: “The Palestinians have done an extraordinary job of remaining committed to non-violence. And in fact when the intifada (in 2015) took place they delivered non-violence – in the West Bank.”
However, Kerry said this was “overlooked by the general population because it’s not a topic of discussion. Why? Because the majority of the cabinet, in the current Israeli government, has publicly declared they are not ever for a Palestinian state.”

Leon tossed the lawsuit, rebuffing the attempt to equate support for BDS with material support for Hamas, which is designated as a terrorist organisation by Washington.

He also said the plaintiffs failed to establish a direct link between the US-based group’s activities and actual attacks against Americans.

“While the plaintiffs make broad allegations that the US Campaign provided financial assistance to Hamas, they fail to plead factual allegations sufficient to support these claims.

The more specific factual allegations involving the BNC and other groups are simply too removed from a terrorist act or organization to state a claim under the ATA,” the judge wrote in his ruling.

“Plaintiffs’ argument to the contrary are, to say the least, not convincing.”

He said the lawsuit reflected Israeli efforts to collectively punish Palestinians for their activism, even those living abroad.

“This reinforces that not only is justice on our side, but also affirms our constitutional rights and ability to continue to fight for the freedom of the Palestinian people,” Abuznaid told MEE.

The Great March of Return started in 2018 as a peaceful protest campaign along the fence separating the Gaza Strip from Israel.

It demanded an end to the blockade on the Palestinian territory and emphasized the right of return for Palestinian refugees who were displaced from their homes in what is today Israel. Gaza is home to 1.9 million Palestinians who are mostly refugees.

Israeli forces killed more than 180 Palestinians, including medics and journalists, during the Great March, which lasted for months.

Protesters responded by lighting up balloons, kites and condoms and flying them into Israeli territories.

The JNF lawsuit described the Palestinian balloons as “arson terrorism” that caused emotional suffering and material damage for the US citizens suing the USPCR.

Judge Leon said that while he empathises with the plaintiffs’ “suffering”, he cannot conclude “that the law provides the relief” that they seek.

Diala Shamas, a staff attorney at the Center for Constitutional Rights, which helped represent the defendants, said she hopes the ruling would be a “turning point” against efforts by private actors to weaponise terrorism laws to silence critics.

“The smearing of human rights advocates as terrorists is a troublingly common and dangerous tactic. The JNF’s complaint perversely cites our clients’ human rights advocacy in an attempt to support their ultimately fruitless effort to hijack US courts,” Shamas said in a statement. 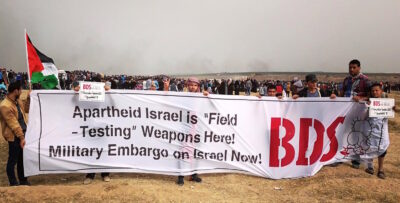 Abuznaid said the lawsuit is part of a broader effort to silence Palestinian rights activism, including laws penalizing individuals and companies that boycott Israel.

“But we have constitutional rights in this country, rights that Israelis are obviously denying us in our ancestral homeland, but that they cannot deny us here in the US,” he told MEE.

Dozens of US states have anti-BDS laws on the books. Federal courts have struck down such legislation in Kansas, Arizona and Texas for violating free speech rights.

Earlier this year, a court of appeals also ruled that an anti-BDS law in Arkansas is in violation of the First Amendment.

The ruling in favour of the USPCR comes weeks after a judge in California dismissed a defamation lawsuit brought by a former Israeli soldier against a Palestinian rights activist.

Abuznaid said he hopes these legal victories would convince US politicians to stop the crackdown on Palestinian rights activism in the United States.

“They cannot silence us. They cannot stop us. I want to keep fighting for a day where freedom and liberation truly includes the Palestinian people,” he said.

LAGenie Retweeted · Press TV @PressTV
2 days ago
Palestinian teen loses his eye after being shot by Israeli forces in occupied West Bank
https://t.co/Y7afIgmVKv
View on Twitter
356
0
LAGenie @lagenie24
3 days ago
18 Reasons I Won't Be Getting a Covid Vaccine
Johnson and Johnson Has Paid $BILLIONS in Criminal Settlements and Never Produced a Vaccine Before – Why Would We Trust Them for a New Experimental COVID Vaccine?

https://t.co/UYPusH2kyu
View on Twitter
0
0
LAGenie Retweeted · Caitlin Johnstone ⏳ @caitoz
7 days ago
Everything the western world believes about itself and its values is invalidated by its treatment of Julian Assange.
View on Twitter
1176
0
LAGenie Retweeted · Stop the War @STWuk
7 days ago
This Thursday's meeting will relaunch @STWUK in #Coventry. You are invited to join the meeting and work for an end to Yemeni people's suffering.

-Wife of Osama Mansour, killed today by UK-armed Israeli forces. https://t.co/3IfELPeHcJ
View on Twitter
1069
0
Follow @lagenie24
The true face of "Israel" is one of genocide, ethnic cleansing, land theft, terrorism, human trafficking, racism, torture and supremacism. Anyone who identifies themselves as "pro-Israel" is praising evil.