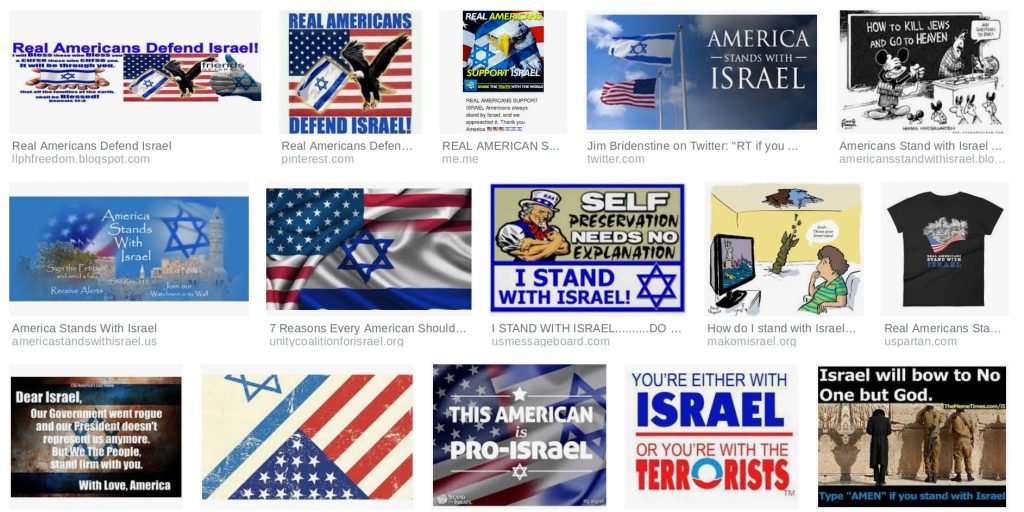 A sample of Zio-patriotic propaganda

We live under a brutal form of fascism that has no equivalent in human history.

There are no longer the rules of law and civilized norms.

It is a barbaric, lawless, rogue, terrorizing and distinctly global Anglo-Zionist fascism.

The Anglo-Zionist alliance led by the US, Israel and Britain.

They are always on the look to provoke aggression, commit war crimes, and inflict greater human misery thousands of miles away from their own borders.

Anglo-Zionist fascism is a Mafia-like criminal enterprise that targets any nation who refuses to kowtow to Anglo-Zionist alliance dictates to exploit its natural resources.

Using its monopoly power on the world’s financial system and trade it can impose a medieval siege (economic sanctions) on any prosperous nation and turn it into a miserable place.

The Zionist Masquerade The Birth of the Anglo-Zionist Alliance, 1914–1918

This Anglo-Zionist alliance poses the greatest threat to world’s peace and humanity itself.

After nearly 20 years of murderous war and occupation of defenseless Afghanistan, the US regime still thirsty for more bloodshed.

But according to Donald Trump, the US is not fighting a war in Afghanistan.

He said: ‘If we fight a war and win it, I could win that war in a week.

But I don’t want to kill 10 million people’. Then he added: ‘Afghanistan could be wiped off the face of the earth’ for no meaningful reason.’

Of course, Trump can ‘win’ the war without the need to kill 10 million people by withdrawing US forces form Afghanistan and stops interfering in Afghanistan’s affairs.

From Afghanistan to Syria to Iraq and to Iran, the US is at war all over the world, and the victims (in millions) of this ongoing war and terror are almost all non-white.

Former US president Jimmy Carter said recently, the US is ‘the most warlike nation in the history of the world’.

The US is currently preparing for war not only against Iran and Venezuela but also against China and Russia. US special forces deployed in more than 150 countries around the world where the US has more than 1000 military bases.

Moreover, in addition to Israel’s 400 nuclear warheads, the US has more than 150 tactical nuclear weapons stored at several locations in Europe that allow the US (and Israel) military to gain immediate control over the majority of the continent of Europe (and the Middle East), at any time.

With the largest arsenals of nuclear, chemical and biological weapons in the world, the US-led Anglo-Zionist alliance is holding the whole world and humanity hostage.

While it is built on the same racist ideology of German fascism, it is naïve and utterly misleading to compare US-led Anglo-Zionist global fascism to the regional German fascism.

In German fascism, the degree of totalitarian controls and war crimes (confined to Europe) have always been wildly exaggerated and used as a political tool — by Zionists and their pro-Israel supporters — to justify today’s more barbaric Israel’s Judeofascism in Palestine.

The exaggeration of Nazi Germany crimes is designed to demonize Germany and allows Israel to extract billions of dollars in ‘reparation’.

With its human face manufactured and promoted by state-funded ‘humanitarian’ NGOs and the ‘legitimacy’ (rubberstamp) of the UN and its agencies, today’s Anglo-Zionist fascism is normalized and legitimized.

It is sugar-coated with Hollywood’s brainwashing (indoctrinating) propaganda and celebrity news destroying the ability of people to think critically.

It is masquerading as ‘democracy’ and is called by different names depending on the perspective of different parties, such as: ‘Democrats’, ‘Republicans’, ‘Labour’, ‘Socialist’, ‘Conservative’, ‘Liberal’, etc.

In the 1930s and early 1940s, there were opposition and political dissidents to German fascism in Germany and in Europe at large.

Today, there is almost no (zilch) resistance and opposition to Anglo-Zionist fascism because its aggression and war crimes are committed against the non-white.

We live under Orwellian police state coupled with intrusive police power and a reign of mass surveillance.

As Hannah Arendt noted in Elements and Origins of Totalitarian Rule (1951): ‘Never has our future been more unpredictable, never have we depended so much on political forces that cannot be trusted to follow the rules of common sense and self-interest — forces that look like sheer insanity, if judged by standards of other [more civilised] countries’.

The rise in neo-Nazi extremism — the neo-Nazi groups and parties are funded by Israel and pro-Israel Zionists — in Europe and North America has nothing to do with Nazi Germany and much to do with today’s anti-Muslim Anglo-Zionist fascism.

It is an obfuscation of reality to manipulate the public.

Unlike Nazi Germany and Fascist Italy, US-led Anglo-Zionist fascism has a near monopoly on a superb global propaganda system dominated by fake news and pro-Western propaganda.

In addition to mass media corporations, including major global TV channels, and major newspapers, Zionists have a complete control over the Internet.

The primary aim is to keep the masses on board brainwashed with the agendas of the ruling (Anglo-Zionist) class thereby diverting people’s attention away from questioning the repressive political system under which they live and work.

And with complete control of the world’s financial and economic systems, any nation that refuses to submit to Anglo-Zionist diktats will suffer the criminal consequences of genocidal sanctions of economic terrorism.

With the largest arsenal of weapons of mass destruction (nuclear, biological and chemical weapons) and armed forces, the US-led Anglo-Zionist regimes exert complete monopolies on armed aggression, human rights abuses and terrorism around the world. Iran is a nation under Anglo-Zionist terror attacks.

Terrorism is no longer a covert US action. By their own admissions, the US political and media establishments have acknowledged that the ‘US government is the world’s biggest sponsor of terrorism’.

The US regime is also the world’s biggest destabilizing force. The US ‘closest allies’, Israel and Saudi Arabia — two most brutal monsters in the Middle East — come second and third respectively.

Together, they recruit, arm, finance, advice and protect every major international terrorist group and entity, including the world’s largest terror organizations, al-Qaeda, ISIS, al-Nusra Front and their associated terrorists.

They are used around the world, from Afghanistan to Syria and to Iraq and Iran.

The US regime has publicly admitted that it sponsors terrorist groups operating within Iran, and has repeatedly threatened to topple the legitimate Iranian government by military aggression.

The US and its allies used terrorism cleverly as a political tool, a useful pretext to attack and invade other nations.

Afghanistan, Iraq, and Libya were attacked, invaded and left in ruin by the US after the US falsely accused these three nations of supporting and ‘harboring’ terrorists. 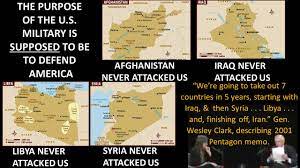 Using the racist colonialist ideology/theory of ‘exceptionalism’ — exceptional in racism, mass murder and inflicting endless misery — the US regime justifies interference in the affairs of every nation, regardless of political, cultural and religious practices.

‘To be chosen is to see oneself as an exceptional creation. It entails blindness to otherness. It is a form of impunity.

To be chosen often involves a near or total lack of empathy. Such lack is often defined in terms of acute narcissism and psychopathy,’ writes British author Gilad Atzmon.

One needs only visit the US to see what an exceptional shithole it is.

Furthermore, many US ‘allies’, including Israel, Britain, Egypt, Saudi Arabia, UAE, Ukraine, Colombia, Kuwait, Honduras, Peru, and Qatar, among others are the world’s most brutal and barbaric regimes.

In fact, every murderous dictator in the world today can count on US support.

One has to look at the recent event in Egypt to see the brutality of US vassal-state ‘allies’.

The premeditated murder of Egypt’s only elected president Muhammed Mursi in a Cairo’s courtroom cage this week and the 3,185 extrajudicial killings by the current Egypt’s dictator are cases in point.

The heinous crime was welcomed with deafening silence by democracy-loving and peace-loving US and European regimes and their Zionist media.

The US presence in the region poses the greatest threat to all nations and is a destabilizing factor designed to drive a wedge between the countries of the region and protect Israel and its Zionist expansion.

Iran has consistently stated that it is prepared to enter into negotiation with the US, but only after a full lifting of US-imposes sanctions on the Iranian people.

Iran also offered conditions under which it would continue to comply with the JCPOA’s terms.

The Iranians also made it clear that they won’t negotiate with the Trump’s regime at gun point.

The onus is on the US and the European states to abide by the Deal.

Iran is prepared to negotiate a peaceful resolution and has called on the US to lift the sanctions and for all parties to respect the Deal signed in 2015 and for trade and diplomatic relations to be normalized, as mandated by the UN-endorsed accord.

Finally, the Islamic Republic of Iran has the legal rights to defend its people and its national sovereignty — including its airspace — from all forms of aggression.

The US has no legal claim of self-defense that would justify a military aggression against Iran.

The US is acting against Americans’ interests. American men and women do not have to die defending Israel’s terror and dispossession of the Palestinian people who are legally resisting Israel’s occupation of their homeland.

They should demand that their government abandon its ongoing aggressive wars, and instead strive to promote harmonious cooperation not hostility and peace rather than war.

The US should learn the art of peaceful coexistence in a world that is very tired of its illegal and unjustifiable wars of aggression, wanton destruction and unnecessary human suffering.

2 thoughts on “US wars for Israel”