Friedman and Greenblatt are dismantling Palestine, one brick at a time

Before being named ambassador, Friedman led a group that raised money for the West Bank settlement of Bet El.

Many American Jews are apoplectic about President-elect Donald Trump’s nomination of David Friedman as his ambassador to Israel.

A coalition of Jewish groups has come together to actively oppose Friedman’s nomination, and even more groups – including IPF – have issued statements ranging from outright opposition to grave concern.

That Friedman represents a stark break from previous ambassadorial residents of Herzliya Pituah is glaringly obvious, but the ways in which this is true have either been lost or intentionally distorted by Friedman’s supporters, who are arguing against strawmen in their boosting of his candidacy.

On the other side, those who oppose him most vigorously are – in my view – correct about how extreme Friedman would be as an ambassador, but are assigning him an importance that he does not warrant and are missing an opportunity to make a far larger and more important argument in the process.

Let’s start with Friedman’s champions. There is an odd conventional wisdom developing that opposition to Friedman is due to the fact that he is a lawyer and not a professional diplomat, a position that his supporters mock for its elitism and calcified thinking.

Appointing friends or supporters as ambassadors is a timeworn practice, but when an American president does it, it is generally to places like the Bahamas or lesser Western European allies.

It is not to extremely sensitive potential hot spots like Israel. Friedman would be the first American ambassador to Israel never to have previously served as a diplomat or worked in a foreign policy government job.

No doubt Friedman is an extremely successful and talented attorney, but the skill set he has deployed in that job has little to do with his new one, and Trump’s own inexperience means that his ambassador cannot be a trainee.

That Friedman’s supporters think his time spent in Israel as a private citizen or his work fundraising for the settlement of Beit El are as relevant as full-time diplomatic or policy experience is actually insulting to the Israeli government, as it sends the message that an amateur is sufficient as our official representative to our most important regional ally.

The truth, however, is that Friedman’s ambassadorial appointment is not particularly consequential.

The U.S. ambassador is a crucial figure in maintaining U.S.-Israel relations, and Ambassador Dan Shapiro has done an excellent job extending that relationship throughout different segments of Israeli society, such as the Haredi and settler communities. But the ambassador’s job is to relay policy, not to make it.

While Friedman may have had prime access to Trump during the campaign, his own priorities and preferences are now going to be filtered through Reince Priebus, Mike Flynn, Rex Tillerson, James Mattis, and others.

Furthermore, Tillerson and Mattis   in particular likely do not share Friedman’s policy inclinations of blowing up the two-state agenda or encouraging Israel to annex the West Bank.

Tillerson and Mattis both fired

Israeli government officials also often have a direct line to the White House and do not need to go through an ambassador, which makes Ambassador Friedman not quite so important a conduit to Trump as campaign Israel adviser Friedman.

There is also the question of how effective Friedman will be if he has to embrace and defend policies to his left, which is a near certainty, and how effective he will be in dealing with the Israeli center and left when he has tarred genuinely centrist groups at home like the ADL as being beyond the pale of his engagement.

In short, Friedman may end up being a relatively ineffective ambassador who will marginalize himself through his own positions and imperious attitude toward those who hold different views.

He will be a deeply problematic ambassador, but not worth going nuclear over.

David Friedman will not be the variable that causes the death of the two-state solution. He is, however, a serious symptom of a segment of American Jewry’s ailment when it comes to Israel, and what he represents is certainly worth a knock down, drag out fight. 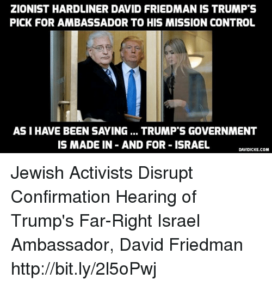 He is the perfect envoy to represent Trump because he immerses himself in a post-truth environment where facts are secondary to the reality that you create for yourself.

Ignore the warnings of every demographic expert about the population numbers because there is a solitary former Israeli diplomat who will tell you that they are wrong.

Pay no heed to what the IDF says about the ticking time bomb of frustrated Palestinians in the West Bank because there are MEMRI videos of imams calling Jews apes and pigs.

Marginalize groups like the ADL as extreme leftists on Israel because nobody in your Orthodox community pays them any heed.

Cast aside the recommendations of the over two hundred generals that comprise Commanders for Israel’s Security because everyone knows that Palestinian sovereignty in the West Bank would automatically create a terrorist state.

Embrace every rightwing axiom and meme, no matter the contrary evidence, because your worldview always trumps any facts that can possibly be thrown your way.

It should be about the approach that maintains that Israel – alone among the entirety of states on Earth – has completely clean hands and is never in the wrong about anything.

It should be about the approach that sees an Israeli civilian presence in the West Bank as enhancing Israeli security rather than harming it, and settlements full of women and children as a bulwark against phantom ISIS hordes about to pour over the border from Jordan.

It should be about the approach that views Prime Minister Netanyahu as a brave leader who takes courageous chances for peace and is only searching for an appropriate partner on the other side, rather than as a politician who does the bare minimum in this sphere and demonizes those who criticize him for it as naïve leftists.

Many of these views have a kernel of truth to them, but those kernels are so deeply buried under an avalanche of opposing or mitigating factors that they miss the other part of the story by miles. So long as such attitudes are prevalent in many American Jewish circles, we will continue to get David Friedmans.

So by all means get upset about his pending ambassadorship, but do not commit the error of thinking that prevailing against his appointment will signal anything but a hollow victory. Pushing back against Friedman is not nearly as vital as pushing back against the environment that has created him.