Hezbollah is a defender against Israel as is Hamas in Gaza, which is why Israel is always attacking them. No one in the M.E. is allowed to defend themselves against Israel, including Iran. 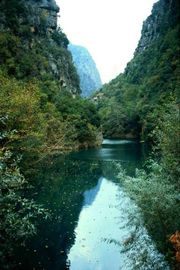 In March 1978 Israel invaded Lebanon, an invasion dreamt up years before.

WHEN CHAIM WEIZMANN and David Ben-Gurion attended the 1919 Paris Peace Conference ending World War I, they presented a map containing the boundaries of their hoped-for Jewish state. The map included what is now Lebanon’s Litani River.

While the two had achieved great success in international geopolitics, they had failed to garner the Litani for Israel. The reason for their failure was the secret Sykes-Picot Treaty of 1915, under which Britain and France already had fixed the border between Lebanon and Palestine. At France’s insistence, Sykes-Picot was upheld at the Paris conference, and the Litani went to Lebanon.

Israel dubbed its March 14, 1978 invasion of southern Lebanon “Operation Litani,” with the stated objective of clearing out Palestinian Liberation Organization (PLO) bases south of the Litani River in order to secure northern Israel. Its 1982 invasion of Lebanon had the added goal of gaining access to the waters of the Litani.

To end the Israeli siege of Beirut, the PLO was rapidly evacuated to Tunisia, and Israel eventually retreated from the Lebanese capital. Yet it never fully withdrew from southern Lebanon until 2000, under pressure from Hezbollah—and 22 years after being ordered to do so by U.N. Security Council Resolution 425.

This water source had been coveted since the enterprise of a homeland for Jews was conceived. Chaim Weizman, then head of the World Zionist Organisation and later Israel’s first President, wrote British Prime Minister David Lloyd George in 1919, calling for the boundaries of the new Jewish national home to extend 25 miles north of the Litani river, inside Lebanon. Amongst other demands his letter asked that:

“the water supply must mainly be derived from the slopes of Mount Hermon, from the headwaters of the Jordan and from the Litani river [of Lebanon]… [We] consider it essential that the Northern Frontier of Palestine should include the Valley of the Litani, for a distance of 25 miles above the bend…”

But the mandate powers, France and Britain, would not redraw the map extending the borders of Palestine into South Lebanon. Between the months of March and June 1978, Israel’s Operation Litani killed more than a thousand civilians, according to the records of local hospitals and the International Committee for the Red Cross.  When Israel withdrew from its positions in June 1978, it handed self-imposed power to a client Lebanese militia in the South, led by Major Sa’ad Haddad.

The same scenario had been envisaged 25 years earlier, by the fledgling Zionist state’s leadership. In his published diary, Israeli Prime Minister Moshe Sharett quoted Army Chief of Staff, Moshe Dayan, who was to become Israel’s Defence Minister, promoting the idea of an Israeli invasion and occupation of southern Lebanon up to the Litani River.  It was a vision enthusiastically supported by General Dayan and David ben Gurion.  Amongst the most telling things Dayan said, was that:

“… the only thing that’s necessary is to find an [Lebanese] officer, even just a Major. We should either win his heart or buy him with money, to make him agree to declare himself the saviour of the [Christian] Maronite population. Then the Israeli army will enter Lebanon, will occupy the necessary territory, and will create a Christian regime which will ally itself with Israel. The territory from the Litani southward will be totally annexed to Israel and everything will be all right.”

Rida may have been just 6 or 7 years old in the early spring of 1978, when thirty thousand soldiers marched north of the river Litani to ‘make peace.’  It was the year of the first big human exodus from the South.  Israeli planes made in the US, flew low like vengeful birds of steel and streaked the sky with jet fuel.  Bombing came from the sea, sky and land.

Tens of thousands of families left futures like trails of ants with children and cartloads of belongings headed for Beirut.  The capital’s ocean-kissed opportunities sparkled for the wealthy and only kissed the few.  Without money or connections, the Paris of the Middle East could become a squalid hell.

In the 15 years leading up to the April 1982 invasion of Lebanon and siege of Beirut, then Defence Minister, Ariel Sharon, claimed that 1,392 Israeli lives had been lost through PLO (Palestine Liberation Organization) violence.

Israeli police archives, searched at the time by the independent newspaper Ha’aretz, revealed the number of Israeli victims of the PLO between the years 1977 and 1982, to be 282 citizens.

Meanwhile Israel’s operations in Lebanon have been documented in countless observations.  These describe the destruction of entire cities and wholesale killing of many thousands.

In 1968, Israel described its bombing of a string of civilian aircraft sitting on the tarmac at Beirut’s International Airport as‘reprisal.’  The act was condemned at the time by the UN Security Council, concluding that:

“Lebanon is entitled to appropriate redress for the destruction it has suffered, responsibility for which has been acknowledged by Israel.”

Israel applied overwhelming military force on Palestinian Refugee Camps inside Lebanon in 1978, 1980 and 1981. The pounding that turned Beirut into a circle of hell-fire rubble in 1982 culminated in the killings of more than three thousand Palestinian civilians at the refugee camps of Sabra and Shatila in September that year. 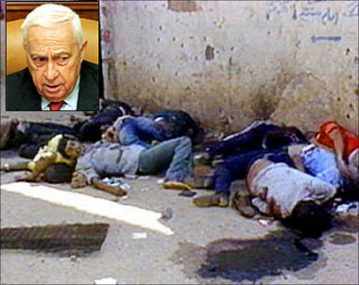 Sabra and Shatila is to the Palestinians what 9/11 is to Americans. Women, children and elderly depicted in unforgettable scenes of horror after the crime were slaughtered over 72 hours by Lebanese militia forces, who closely co-ordinated their actions with Israeli military commanders on the ground overseeing the camps.

Their fly-ridden and bloated bodies were left to rot in the sun.

Military operations within Lebanon have been given various names by Israel.  Names such as ‘Stone of Wisdom,’ ‘Operation Accountability,’ even references taken from biblical hymns, such as the 1996 ‘Grapes of Wrath.’

The three-month long siege of Beirut in the summer of 1982, that reduced a thriving economic metropolis into acres of surreal art, and killed more than twenty thousand Lebanese, was called ‘Peace for Galilee.’

Southerners with their fateful brand of local sarcasm would say: “Why don’t they call the next one ‘Kill the sons of dogs‘? That way we’ll be sure they really are coming in peace.”

War aims were wider than the publicized mission of the invasion which was to ‘remove’ the PLO.

Ordinary people were instead wiped out by what foreign journalists and residents of the city described as indiscriminate bombing, while the PLO and its leaders remained very much intact and alive.

The response to these aims would be more enduring than either Israel, or the rest of the world, could have imagined at the time.

Through settlements, through the harsh and daily realities of occupation, through state terror tactics, through laws and administrative procedures that discriminate on ethnicity and race, through imprisonment without charge for indefinite periods, denial of freedom or movement to residents of towns or villages, and more than fifty years of emergency laws that have sanctioned the humiliation of an entire people – the government of Israel has tried to destroy the will, the national identity and consciousness of Palestinians, as well as weaken and divide surrounding Arab nations.

Israel regards the weakening of these nations, as central to the struggle for her political and economic dominance of the region.

On the 9th of July 1982, the Israeli newspaper, Ha’aretz, reported the Chief of Staff of the Israeli Army, General Rafael Eitan, as saying that the:

Defence Minister Ariel Sharon, referred to another basic aim of the War in Lebanon when he said,

‘The bigger the blow and the more we damage the PLO infrastructure, the more the Arabs in Judea and Samaria and Gaza will be ready to negotiate with us and establish co-existence.’

What was fashionable in the ’50s made a come-back in the ’80s. Successive Israeli war cabinets wanted Jordan to become the new Palestine, since historic Palestine and its inhabitants would never be welcome in the modern state of Israel.

Ariel Sharon was quoted by the British press in June 1982: “But they have a homeland,” he said referring to the Palestinians. “It is the Palestine that is called Jordan.”