Palestinians evacuate a survivor of an Israeli airstrike that hit a family building Sunday in Rafah, in southern Gaza. AP/Eyad Baba

The Big Lie feeds the two reactions Israel seeks to elicit — racism among its supporters and terror among its victims.

All governments lie, as I.F. Stone pointed out, including Israel and Hamas.

But Israel engages in the kinds of jaw-dropping lies that characterize despotic and totalitarian regimes.

It does not deform the truth; it inverts it.

It routinely paints a picture for the outside world that is diametrically opposed to reality.

And all of us reporters who have covered the occupied territories have run into Israel’s Alice-in-Wonderland narratives, which we dutifully insert into our stories — required under the rules of American journalism — although we know they are untrue.

I saw small boys baited and killed by Israeli soldiers in the Gaza refugee camp of Khan Younis.

The soldiers swore at the boys in Arabic over the loudspeakers of their armored jeep.

The boys, about 10 years old, then threw stones at an Israeli vehicle and the soldiers opened fire, killing some, wounding others.

I was present more than once as Israeli troops drew out and shot Palestinian children in this way.

Such incidents, in the Israeli lexicon, become children caught in crossfire.

I was in Gaza when F-16 attack jets dropped 1,000-pound iron fragmentation bombs on overcrowded hovels in Gaza City.

I saw the corpses of the victims, including children.

This became a surgical strike on a bomb-making factory.

I have watched Israel demolish homes and entire apartment blocks to create wide buffer zones between the Palestinians and the Israeli troops that ring Gaza.

I have interviewed the destitute and homeless families, some camped out in crude shelters erected in the rubble. 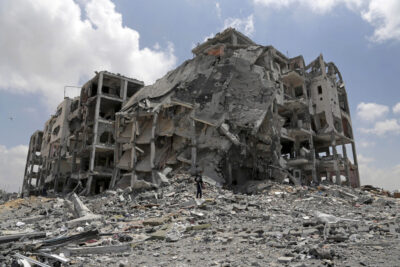 A Palestinian searches for salvageable items from the rubble of his house that was destroyed in Israeli strikes.

The destruction becomes the demolition of the homes of terrorists.

I have stood in the remains of schools — Israel struck two United Nations schools in the last six days, causing at least 10 fatalities at one in Rafah on Sunday and at least 19 at one in the Jebaliya refugee camp Wednesday — as well as medical clinics and mosques.

I have heard Israel claim that errant rockets or mortar fire from the Palestinians caused these and other deaths, or that the attacked spots were being used as arms depots or launching sites.

I, along with every other reporter I know who has worked in Gaza, have never seen any evidence that Hamas uses civilians as “human shields.”

There is a perverted logic to Israel’s repeated use of the Big Lie — Große Lüge — the lie favored by tyrants from Adolf Hitler and Josef Stalin to Saddam Hussein.

The Big Lie feeds the two reactions Israel seeks to elicit — racism among its supporters and terror among its victims.

By painting a picture of an army that never attacks civilians, that indeed goes out of its way to protect them, the Big Lie says Israelis are civilized and humane, and their Palestinian opponents are inhuman monsters.

The Big Lie serves the idea that the slaughter in Gaza is a clash of civilizations, a war between democracy, decency and honor on one side and Islamic barbarism on the other.

And in the uncommon cases when news of atrocities penetrates to the wider public, Israel blames the destruction and casualties on Hamas.

George Orwell in his novel “Nineteen Eighty-Four” called this form of propaganda doublethink. Doublethink uses “logic against logic” and “repudiate[s] morality while laying claim to it.”

The Big Lie does not allow for the nuances and contradictions that can plague conscience.

It is a state-orchestrated response to the dilemma of cognitive dissonance.

The world is black and white, good and evil, righteous and unrighteous.

The Big Lie allows believers to take comfort — a comfort they are desperately seeking — in their own moral superiority at the very moment they have abrogated all morality.

The Big Lie, as the father of American public relations, Edward Bernays, wrote, is limited only by the propagandist’s capacity to fathom and harness the undercurrents of individual and mass psychology.

And since most supporters of Israel do not have a desire to know the truth, a truth that would force them to examine their own racism and self-delusions about Zionist and Western moral superiority, like packs of famished dogs they lap up the lies fed to them by the Israeli government.

The Big Lie always finds fertile soil in what Bernays called the “logic-proof compartment of dogmatic adherence.” All effective propaganda, Bernays wrote, targets and builds upon these irrational “psychological habits.” 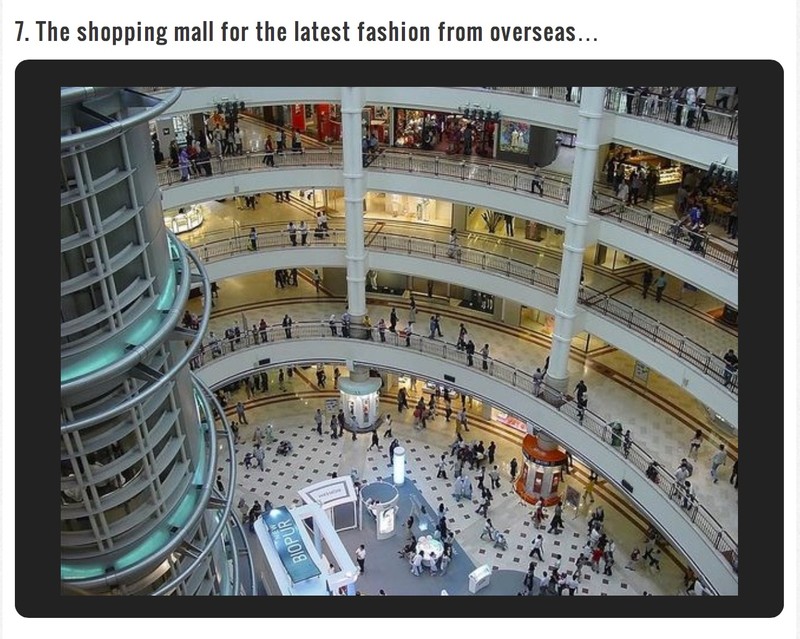 Fake image – “Israel” wants us to believe that Gaza (or any part of Palestine where Palestinians inhabit ) is just a normal place…Palestinians are just “complainers”. If you do a Google Image search using the image from the “IDF” blog post, the same image turns up associated with the Metro Plaza shopping mall in Kolkata, India as well as several other places. Another BIG LIE.

This is the world Franz Kafka envisioned, a world where the irrational becomes rational.

It is one where, as Gustave Le Bon noted in “The Crowd: A Study of the Public Mind,” those who supply the masses with the illusions they crave become their master, and “whoever attempts to destroy their illusions is always their victim.”

This irrationality explains why the reaction of Israeli supporters to those who have the courage to speak the truth — Uri Avnery, Max Blumenthal, Noam Chomsky, Jonathan Cook, Norman Finkelstein, Amira Hass, Gideon Levy, Ilan Pappé, Henry Siegman and Philip Weiss — is so rabid.

That so many of these voices are Jewish, and therefore have more credibility than non-Jews who are among Israel’s cheerleaders, only ratchets up the level of hate.

But the Big Lie is also consciously designed to send a chilling message to Gaza’s Palestinians, who have lost large numbers of their dwellings, clinics, mosques, and power, water and sewage facilities, along with schools and hospitals, who have suffered some 1,650 deaths since this assault began — most of the victims women and children — and who have seen 400,000 people displaced from their homes.

The Big Lie makes it clear to the Palestinians that Israel will continue to wage a campaign of state terror and will never admit its atrocities or its intentions.

The vast disparity between what Israel says and what Israel does tells the Palestinians that there is no hope.

Israel will do and say whatever it wants. International law, like the truth, will always be irrelevant.

There will never, the Palestinians understand from the Big Lie, be an acknowledgement of reality by the Israeli leadership.

The Israel Defense Forces website is replete with this black propaganda.

“In Hamas’ world, hospitals are command centers, ambulances are transport vehicles, and medics are human shields,” the site insists.

“… [Israeli] officers are tasked with an enormous responsibility: to protect Palestinian civilians on the ground, no matter how difficult that may be,” the site assures its viewers.

And the IDF site provides this quote from a drone operator identified as Lt. Or.

“I have personally seen rockets fired at Israel from hospitals and schools, but we couldn’t strike back because of civilians nearby.

In one instance, we acquired a target but we saw that there were children in the area.

We waited around, and when they didn’t leave we were forced to abort a strike on an important target.”

Israel’s ambassador to the United States, Ron Dermer, in a Big Lie of his own, said last month at a conference of Christians United for Israel that the Israeli army should be given the “Nobel Peace Prize … a Nobel Peace Prize for fighting with unimaginable restraint.”

The Big Lie destroys any possibility of history and therefore any hope for a dialogue between antagonistic parties that can be grounded in truth and reality.

The old sophists, she said, “destroyed the dignity of human thought.”

Those who resort to the Big Lie “destroy the dignity of human action.”

The result, Arendt warned, is that “history itself is destroyed, and its comprehensibility.”

And when facts no longer matter, when there is no shared history grounded in the truth, when people foolishly believe their own lies, there can be no useful exchange of information.

The Big Lie, used like a bludgeon by Israel, as perhaps it is designed to be, ultimately reduces all problems in the world to the brutish language of violence.

2 min video clip Israel is an imperial outpost, an extension of Wall Street and the City of London in the Middle East. That's the origin of "Israel."
LAGenie @lagenie24
9 hours ago
One or both of those still on the run after the #GilboaPrison break could now be holed up in #Jenin, Zionist terrorist in charge said, prompting “the possibility of launching a large-scale terrorist operation” there. #Palestine #Israel https://t.co/RnR4XJziuc
View on Twitter

0
0
LAGenie @lagenie24
10 hours ago
Israel considers all Palestinians who aren't GONE enemies and terrorists. Enemies because Palestinians owns the land "Israel" sits on. Israeli leaders don't want to confuse ppl as to who is the real terrorist. #occupiedpalestine https://t.co/7p1hdAmH4Q
View on Twitter

0
0
LAGenie Retweeted · Team Palestina @TeamPalestina
10 hours ago
Tomorrow! #Derry #IPSC will have an information stall at the University of #Ulster Magee campus for freshers' week on Monday 20th September from 9.30 to 3pm. Find out about the work of the @IPSC and about #Palestine 🇵🇸 https://t.co/FlYYZo6vAM
View on Twitter

2
0
LAGenie Retweeted · Oldham Peace and Justice @OLDpeacejustice
10 hours ago
Israel continues to bomb the Gaza Strip on a regular basis.