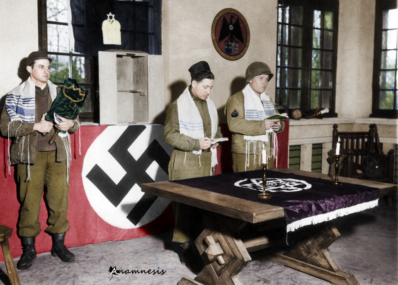 Most probably Zionism has the features of everything mentioned, which does not make its face less evil.

The objectives of Zionists concern not only with the current state of Israel, but with the mere survival of the Jewish mafia in the ever-changing world.

Due to the implementation of this program, the state of Israel has become a mini-empire with its tendency to expand at the expense of the neighboring states, big military ambitions and a long record of human rights violations.

The truth of the matter is that Zionist ideas are strikingly similar to those of the Nazis, and they can be also found in the Torah.

They have to do with the concept of the will for power and with the ideology of racial superiority, and are related to the theory of the exceptionality of the Jewish nation chosen by Jehovah.

You may ask: what the hell does all this stuff have do with the United States? Oh, this is an interesting question.

Many activists, intellectuals and spiritual leaders in the past voiced their concern at the outrageous fact that the USA, which is the world’s superpower, is ruled by the Zionists rather than by its own citizens.

It is well known that a substantial portion of the US budged is spent annually to allow the members the Kahal to live in luxury and to accumulate fortunes.

One of the main ways for the Zionist clan to increase its influence is through the clandestine corroboration with state institutions, and this story has a long history.

Now it is no more a secret that Judeo-Zionist groups and organizations flourish in the USA because they enjoy support of influential politicians and businessmen.

What especially disturbs me is how Christian faith is corrupted by the influence of Judaist and Zionist ideas on it.

The teachings of false prophets create a misleading view that there is no difference between the Jewish god (whose cabalistic name is Tetragrammaton that means a thing of no sense) and Jesus our Lord and Savior.

Only an idiot cannot notice the huge difference between the teaching of Jesus Christ and the false teachings of the Pharisees whose evil practices in the form of lies, abuses and all sorts of crimes have not changed for two thousand years and who used to saw the seeds of hatred wherever possible.

Yet the Kahal of evil-doers seeks for new ways to implement their schemes aimed to rob whole nations and countries.

The citizens of the USA have been their victims for many years, if not to say generations, so what will come next?

Will we ever get freedom for all people, or this is only an empty and high-sounding slogan of hypocritical preachers who are in love with jewish whores?