Every terrorist organization since then has been a creation of the Israeli Mossad. From AlQaeda’s 9/11 to ISIS/ISIL/IS’s reign of terror in the Middle East and Europe, every act of terror has Israel behind it.

Zionist Jews introduced terrorism in the Middle East, built Israel with it, and are taking the world for a ride using it. 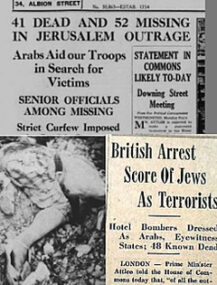 The hotel after the bombing

Their first major salvo came when they bombed the King David Hotel in Jerusalem, Palestine on July 22nd, 1946. It was carried out by Jewish terrorists under the Irgun name.

Their target was the British administrative headquarters for Palestine, which was housed in the southern wing of the Hotel. Ninety-one people of various nationalities were killed and 46 injured.

Their second most important salvo materialized when in 1948 Jewish terrorists forced hundreds of thousands of Palestinians out of their homes and into neighboring Arab countries, while massacring thousands upon thousands. Said terrorist undertaking was called the Nakba, and gave birth to Israel.

“Israeli vans with loudspeakers drove through the streets ordering all the inhabitants to evacuate immediately, and such as were reluctant to leave were forcibly ejected from their homes by the triumphant Israelis whose policy was now openly one of clearing out all the Arab civil population before them,” recounts military historian Edgar O’Ballance.

“From the surrounding villages and hamlets, during the next two or three days, all the inhabitants were uprooted and set off on the road to Ramallah… No longer was there any ‘reasonable persuasion.’

Bluntly, the Arab inhabitants were ejected and forced to flee into Arab territory… Wherever the Israeli troops advanced into Arab country the Arab population was bulldozed out in front of them.”

To switch the focus away from their terrorist acts, the Jews began to portray the Palestinians as terrorists. 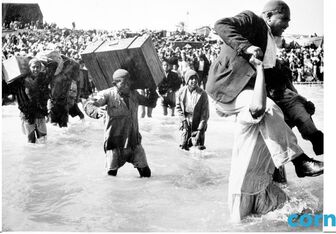 “Israel has been demonizing Muslims for 60 years and has created the image of Muslims as terrorists wearing suicide bombs…” reveals Dr. Paul Craig Roberts, former Assistant Secretary of the Treasury.

Israel accomplished this by orchestrating false flag terrorism that they subsequently blamed on Palestinians. The two most famous acts that set the stage for their propaganda were the Entebbe Hijacking and the Munich Olympics Kidnapping – both fake.

Terrorism, as clamored by Israel, is never what they purport it to be. The BBC reports:

“It has been seen as a daring raid by crack Israeli troops to rescue dozens of their countrymen held at the mercy of hijackers.

“But newly released documents contain a claim that the 1976 rescue of hostages, kidnapped on an Air France flight and held in Entebbe in Uganda, was not all it seemed.

“The flight was seized shortly after it took off from Athens and was flown to Entebbe, where 98 people were held hostage, many of them Israeli citizens.

“A UK government file on the crisis, released from the National Archives, contains a claim that Israel itself was behind the hijacking.

“The operation was designed to torpedo the Palestine Liberation Organization (PLO)’s standing in France and to prevent what they saw as a growing rapprochement between the PLO and the Americans.”

In the end, all “terrorists” were killed. Dead men tell no tales.

Supposedly, during the 1972 Olympic Games, Palestinian terrorists kidnapped 11 Israeli athletes. However, the whole thing was staged by Israeli Jews themselves. From Vexman’s Thoughts:

“The admitted ringleader of the Munich Olympic incident is a man named Luttif Affif (alternate, Afif), also known as Luttif Issa (Jesus in Arabic). The last name Affif is strictly Jewish, in fact, very much so.

“It is a common Sephardic name (or surname of Jews from Arab countries). Lutif is not a common name, it is probably a bastardization of Lutfi (or Loutfi), which means ‘kind’ or ‘friendly’. It is also a common first name among Arabic-speaking Jews.

“Wikipedia admits it openly, that Issa’s mother was Jewish. But the most interesting part of Luttif Afif’s biography at Wikipedia is certainly the following, where his involvement in the Munich 1972 alleged attack is described:

“Afif spent most of his time in front of 31 Connollystraße chatting with either the German delegation or the young policewoman Anneliese Graes. According to Graes, Afif spoke fluent German with a French accent. She described him as ‘always polite and correct.’ When he was asked not to wave his hand grenade in front of her, he simply laughed and replied, ‘You have nothing to fear from me.’”

In the end, everyone was killed, hostages and “terrorists.”

“The Zionist approach that Jewish blood is the anointing oil needed for the wheels of the Jewish state is not a thing of the past,” explains Rabbi Shonfeld. “It remains operable to this very day.”

The most notorious of all so-called Palestinian Terrorists was Abu Nidal, also suspected to have been born of Jewish parents. Even if that was not the case, he was still a Mossad operative.

“According to Patrick Seale, Middle East correspondent for the London Observer and writer of many books on the Middle East, including a biography of Syrian President Ha­fez ai-Assad, the world’s most dangerous Palestinian terrorist was, in fact, in the pay of the Mossad,” writes Dean Andromidas.

Every terrorist organization since then has been a creation of the Israeli Mossad. From AlQaeda’s 9/11 to ISIS/ISIL/IS’s reign of terror in the Middle East and Europe, every act of terror has Israel behind it.

“I want Netanyahu to begin telling the truth, what the involvement of Israel was in 9/11,” declares Dr. Steve Pieczenik, former Deputy Assistant Secretary of State. “Over 134 Mossad operatives were picked up on 9/11. The FBI picked them up [and] debriefed them.

“For as long as I have known the Israeli security apparatus — part fantasy/part braggadocio — they have always been in partnership with a host of terrorist groups from the very day that these groups were even conceived.”

That’s because only Israel benefits from so-called “Islamic Terrorism” (i.e., Israeli false flag terrorism blamed on Muslims). With every despicable act of false flag terror, Zionist Jews can go on stealing more Arab lands, as well as deflecting the world’s attention from their war crimes in Gaza and their Apartheid regime.

In turn, this makes oppressing the Palestinians justifiable – especially as unrest is growing in the occupied territories. It doesn’t hurt either that every so-called “Islamic Terrorist Act” causes the West to clam up about the comatose peace process that the Israelis refuse to see through.

Jesus’s peace and morality had been steadily increasing throughout the world, until that deadly, persistent Talmudic Ashkenazic Khazarian (aka Jewish) virus, which invariably hates the Prince of Peace and His followers, craves immorality, and engenders wars, began its terrorist assault on mankind, especially on Christian civilization.

A few decades from now, a generation will look back and label this anti-Christ period of Jewish terrorism and manipulation as a New Dark Age.

0
0
LAGenie @lagenie24
3 days ago
Israel officials met Arab leaders disguised as women:
As he was commenting on Israeli P M Netanyahu's secret visit to Saudi Arabia and meeting with Crown Prince Bin Salman, Yatom said such meetings would often take place at night and away from the eyes of the world. https://t.co/Z3CUJDR9Gw
View on Twitter

0
0
LAGenie @lagenie24
3 days ago
Blinken has said all parties should go back in, and make the deal tougher on Iran.
Netanyahu has been saying loudly that the U.S. must not reenter the deal. This could get interesting…
https://t.co/OuV35pKTOR
View on Twitter
0
0
LAGenie Retweeted · Henry Makow @HenryMakow
1 week ago
There is no great secret global backroom conspiracy developed behind closed doors. What we have is an upfront, publicly co-ordinated, globe-spanning political power campaign to use the COVID-19 pandemic as a launchpad for a reshaping of the global economy